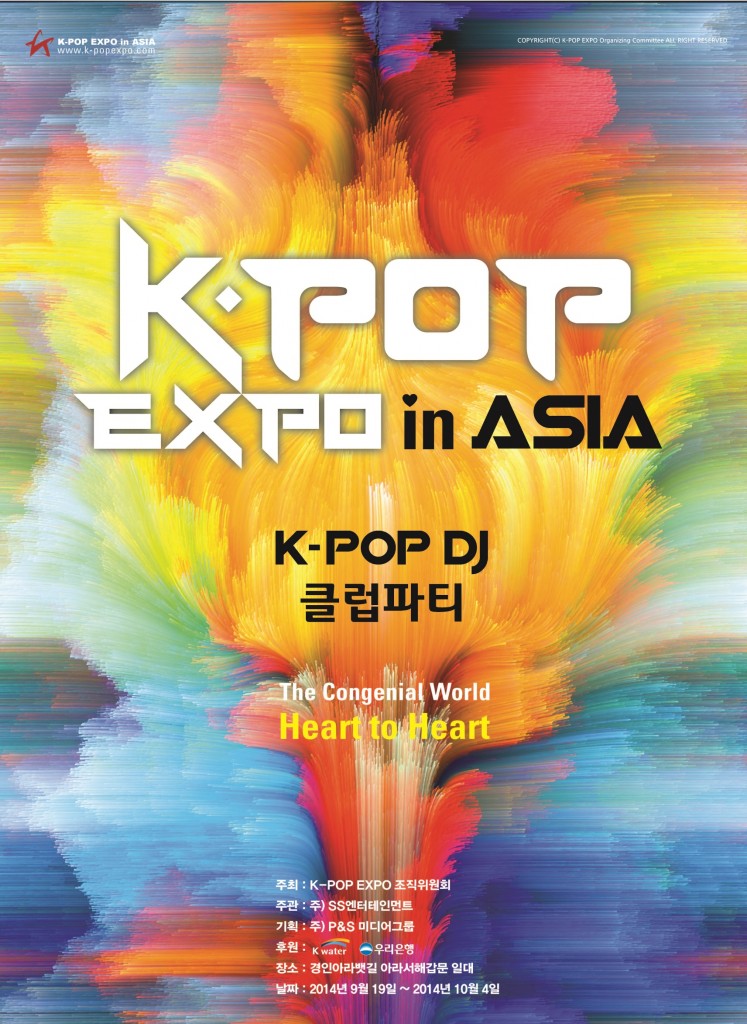 The expo is expected to be the largest global music festival in size that was ever held in Korea. (image: the K-pop Expo Organizing Committee)

SEOUL, Aug. 27 (Korea Bizwire) — Amid the Hallyu  — a wave of popular South Korean culture — sweeping through the entire Asia and now starting to invade the rest of the world, evident from K-pop YouTube videos gathering over 3 billion hits from total 225 countries, “K-pop Expo in Asia,” which will be the largest K-pop festival that Asia has ever seen, will be held in Incheon.

Hosted by the K-pop Expo Organizing Committee, the event will be held alongside with the biggest sporting event of Asia, the 17th Incheon Asian Games, during the same 17-day period of the Asian Games, from September 19 to October 5, in Incheon.

The organizing committee has set sail on last March, has appointed 2PM, a famous K-pop boy band, as their honorary ambassadors and successfully held a briefing session with over 400 audiences including officials from the Korean embassies of 35 Asian countries.

With an introduction of the expo’s theme, “Hearts-connected One World,” the committee has revealed that the expo will present an exhibition to introduce the 100-year history of Korean pop music. A carnival of dynamic programs are also to intrigue K-pop fans and Asian Games visitors in the expo, the committee said, including Asia Star Audition, a DJ club party, concerts and performances of all genres including indie-rock, rock, hip-hop, trot — Korean version of folk music, ballad, classic, and guk-ak (Korean traditional classic music) and lastly, K-pop concert where all of the prominent K-pop idol groups will take the stage.

Furthermore, the expo will not merely stop at just introducing K-pop; it will do more than that. As it is hosted in association with “the Olympic of Asia,” the event also looks to blend the diverse cultures and music of other Asian nations with programs such as an exhibition of 43 different cultures of the competing countries, performances of their traditional music, Asia Traditional Food Court and Asia Pop Festival. The expo is expected to be the largest global music festival in size that was ever held in Korea.

For students, the festival will be an excellent field trip venue to foster creativity, as the exhibition of Korean popular music history presents the development process of pop music in Korea with the pieces of Korean history linked to the process as well as the area where they can actually see and listen to the music of the times, the committee explained.

What will be the largest K-pop music festival ever held in Korea as well as elsewhere in the world would not be happening if it wasn’t for the vast popularity of K-pop. The entire Asia-wide ecstatic reaction to K-pop music seems to be driven by many reasons, but Sim Yong-Tae, the chief director of the expo organizing committee, cited two main reasons.

“There are two main factors behind the success of K-pop overseas and they are, one, the competitiveness of its contents themselves, and two, K-pop’s unique media strategy. K-pop contents’ global competitiveness comes from its localization strategies, the unique idol group fostering system of Korea and the competitiveness of K-pop stars. Also, K-pop’s media strategy is different from the existing ones in that it has adapted well in changes in the web environment, the rapid spread of smartphones and digital satellite broadcasting, as shown in how successfully it has utilized the social media channels in its promotion.”

He added, “For K-pop to run on flourishing, continued efforts from producers, performers and as well as Korean people must be put into improvements in its content, and this global expo will be the turning point. We look to show the world the rich and diverse musical assets of Korea which have existed through the 100-year history of Korean pop music.”