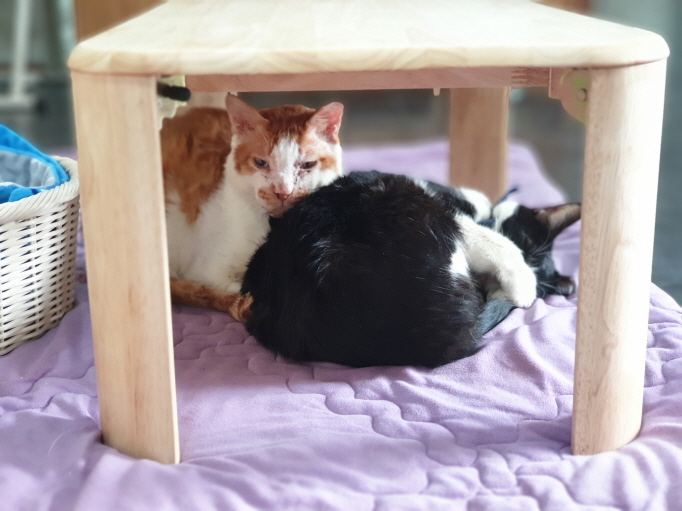 Cats living here have been rescued by local governments or animal rights groups in nearby areas. (image: Senior Cat Center)

SEOUL, Apr. 1 (Korea Bizwire) — There are places where cats that are old, sick and cannot live with people because they are too fierce to live with are gathered to be taken care of until they die.

The Senior Cat Center, a cat hospice shelter in Suwon houses 15 cats, including aging cats, cats that are not old but have a disability or illness, and a kitten waiting for adoption.

The space, opened in 2017 by the volunteer group Volunteer Us, is a 100-square meter cafe that can be easily visited by ordinary people as well as a place to live for cats that have nowhere to go.

There are no staff members, and 20 volunteers take turns to take care of the cats and respond to customers.

Cats that are too sick or don’t like people are isolated in a separate room, but cats in the café are very socialized and like interacting with people.

Cats living here have been rescued by local governments or animal rights groups in nearby areas such as Suwon, Yongin and Gwangju in Gyeonggi Province, and are typically euthanized due to age, disease or serious disability.

The local government also brings in cats that are healthy but are likely to be euthanized because they cannot socialize with people.

“There are times when I can’t ask the cats whether it’s good to prolong their life by giving them medicine and giving them special food that cats don’t like very much, or giving them delicious food and letting them have as much fun as possible,” said volunteer Choi Seung-hee.

At the facility, cats that have little time left will not let go of hope, receive medical treatment, and are taken care of it as best as possible until the end. Here, death is described as “cats returning to their home.”

At this time, volunteers prepare a portrait and incense and hold a funeral service.

On one side of the shrine, there is a memorial hall that houses photos of 18 cats at the end of their graves and a Memorial Stone made of cremated bones.

As there are many cats that need treatment, the hospital bills are significant. By running a café, the facility generates some revenue, but it typically only covers utilities.

Oh Kyung-ha, the head of the Organization for Abandoned Cats, who runs the center, pays for many expenses out of pocket. The details of the donations and expenses are disclosed on the center’s website.

“What I want most is for cat shelters to disappear completely,” Oh said.

“I hope that the day will come when people don’t give up on cats just because they got tired of raising them, seeing them just as another commodity to buy and sell.” 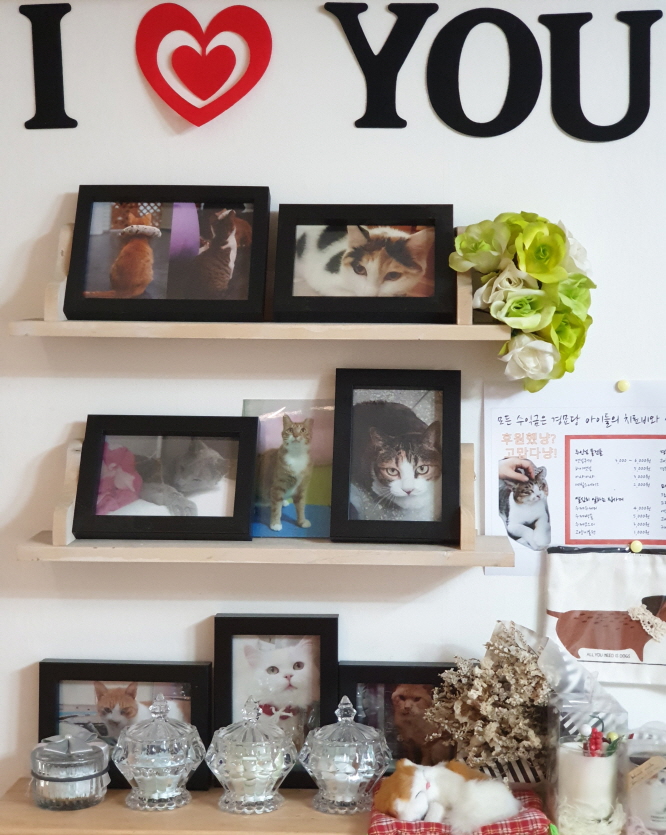