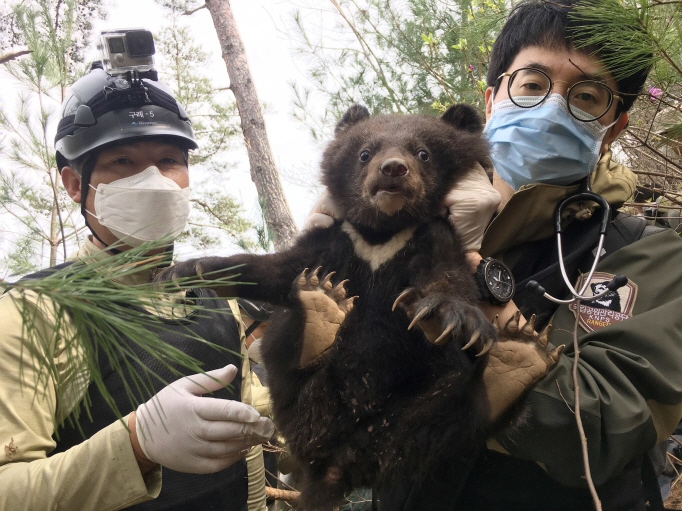 A 14-year-old Asiatic black bear (KF-27) was found to have given birth to two female cubs during a study at Mount Jiri conducted last month. (image: Korea National Park Service)

The state-run Korea National Park Service (KNPS) announced Tuesday that a 14-year-old Asiatic black bear (KF-27) was found to have given birth to two female cubs during a study at Mount Jiri conducted last month.

KNPS researchers also heard the cry of a new cub in February during the investigation of a hibernation den of a 7-year-old bear (KF-47).

The research team failed to approach the den, however, and decided to install unmanned camera sensors in front of the den’s opening to determine the exact number of cubs.

So far, there are at least 69 Asiatic black bears, including the three new cubs born this year, living at Mount Jiri and the Greater Seoul Metropolitan Area.

For KF-27, this is the fifth birth since she was first released to the wild in 2008. Among all bears, she has given birth to the highest number of cubs, with nine.

There are currently five female bears expected to give birth this year. The KNPS has set up cameras around their dens for observation.

Researchers will determine the exact number of new births by checking video records after the bears wake up from hibernation and leave their dens. They are expecting that the bears will begin to wake up as early as next month.

As bears are waking up, the KNPS has set up unmanned information systems at 67 locations across Mount Jiri National Park to protect both visitors and bears.

Park officials have also set up warning flags in areas near the bears’ hibernating grounds and habitat.