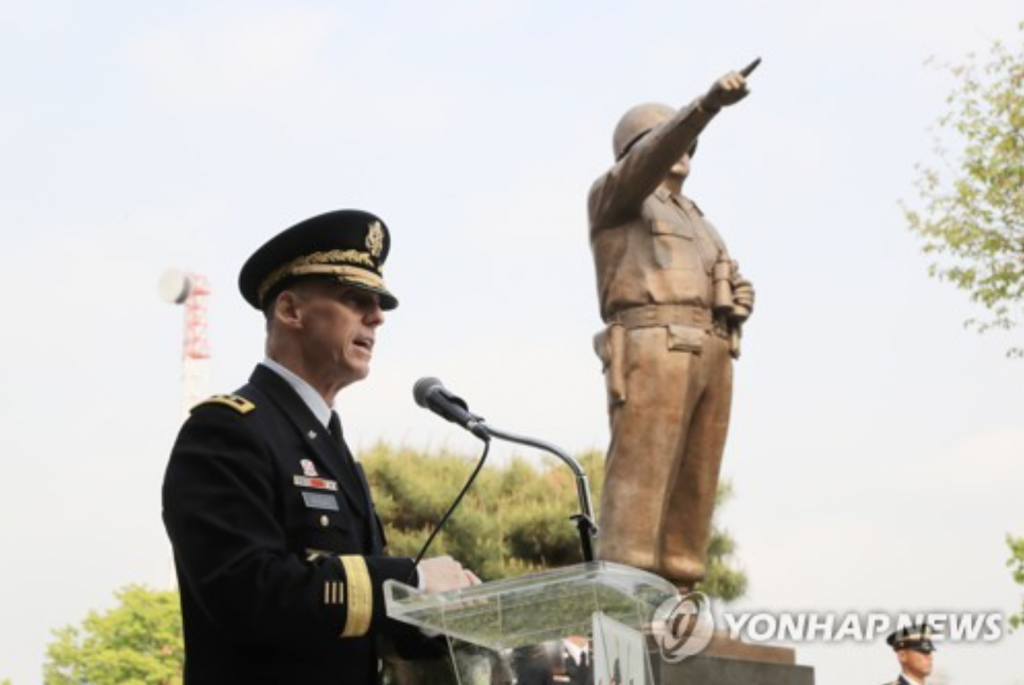 Lt. Gen. Thomas S. Vandal, the commanding general of the 8th Army, delivers a speech at the Gen. Walker Monument Transition Ceremony held at the Yongsan base in Seoul on April 25, 2017. (image: Yonhap)

SEOUL, April 25 (Korea Bizwire) – American troops in Seoul kicked off their full-fledged relocation Tuesday to a refurbished base south of the capital with a symbolic ceremony to commemorate Gen. Walton H. Walker, a Korean War hero.

Standing in front of the 8th Army’s headquarters at Yongsan garrison, the 10-foot-tall bronze statue is a token of the U.S. fight against North Korea alongside South Korea in the 1950-53 conflict and their decades-old alliance.

Walker, born in 1889 and killed in a 1950 car accident in Korea, is credited with playing a pivotal role in defending the South from the North’s aggression. He is especially known for having commanded U.S. troops at the so-called Busan Perimeter, paving the way for Gen. Douglas MacArthur’s historic amphibious landing in Incheon.

Taking initial steps to move to Camp Humphreys in Pyeongtaek, Gyeonggi Province, the Eighth Army held the “statue transition” event. The statue will actually be transfered to the Humphreys in May and a formal unveiling ceremony is slated for July 13.

Lt. Gen. Thomas S. Vandal, the commanding general of the 8th Army, said the statue transition “underscores” the base relocation. 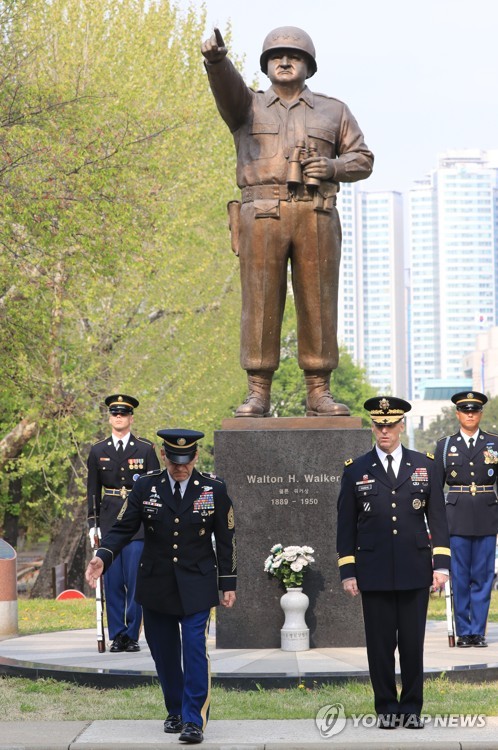 “Despite the statue moving, make no mistake about it. Our alliance ‘gachigapsida (Let’s go together)’ spirit remains ironclad and strong,” he said in a speech at the event joined by more than 50 dignitaries.

They included Paik Sun-yup, a 95-year-old retired South Korean Army general. Paik, who served in the South’s military during the Korean War, is the honorary commander of the Eighth U.S. Army, the core element of the 28,500-strong U.S. Forces Korea.

Vandal noted Paik is the only figure “here” to have worked together with Walker.

He also pointed out that the base relocation work has been “in the making” for about 10 years.

After a long delay, the 8th Army plans to complete its transition to the Pyeongtaek base in late June.

The remainder of the American troops in the Yongsan facilities will be relocated there by the end of this year, with the headquarters of the Combined Forces Korea staying at the current base.