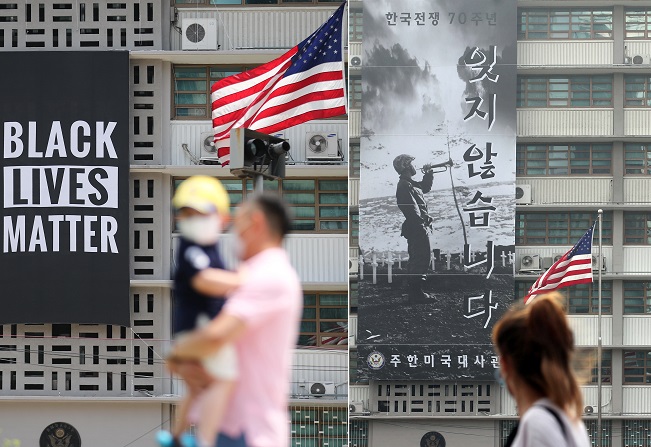 This composite image shows a Black Lives Matter banner hanging from the wall of the U.S. Embassy in Seoul (left picture) on June 14, 2020, while the picture on the right shows a banner commemorating the 70th anniversary of the outbreak of the 1950-53 Korean War hanging from the wall on June 16, 2020, after the anti-racism banner was taken down. (Yonhap)

SEOUL, June 16 (Korea Bizwire) — The U.S. Embassy in Seoul said Tuesday that the Black Lives Matter banner hung on the facade of its building earlier this week was removed to “avoid misperception,” amid reports the removal came after President Donald Trump voiced displeasure.

On Saturday, the embassy put up the banner, a symbol of an anti-racism movement in the United States and beyond sparked by the police killing last month of an unarmed African-American, George Floyd, but it disappeared Monday.

“The ambassador’s intent was not to support or encourage donations to any specific organization. To avoid the misperception that American taxpayer dollars were spent to benefit such organizations, he directed that the banner be removed,” an embassy spokesperson said in a message sent to Yonhap News Agency.

“This in no way lessens the principles and ideals expressed by raising the banner, and the embassy will look for other ways to convey fundamental American values in these times of difficulty at home,” the official added.

The official stressed that Ambassador Harry Harris’s decision to hang the banner was aimed at communicating a “message of solidarity” with Americans concerned with racism and highlighting the “American values of racial equality, freedom of speech and the right to peacefully protest.”

Trump has drawn criticism for his intent to crack down on rallies against racism and police violence, which triggered a divisive debate within his administration over whether to use even active-duty forces for law enforcement against protesters.

The protests have apparently been heavily weighing on the American president already saddled with a raft of challenges, such as the COVID-19 pandemic and its economic fallout, as he is gearing up for the November presidential election.

After hanging the banner, the U.S. Embassy tweeted that the banner was a protest against police brutality, and that it showed its will to move toward a more tolerant and just society.