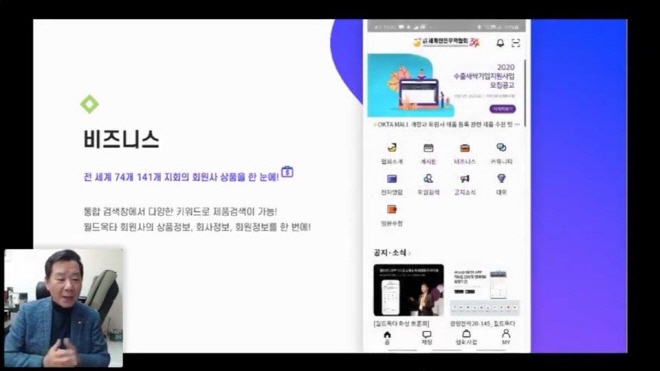 World-OKTA held a briefing session on the renewed World-OKTA app at on May 13 for an hour via a webinar. (image: World-OKTA)

SEOUL, May 18 (Korea Bizwire) — More than 1,000 overseas Koreans from more than 40 countries around the world are attracting attention by communicating online.

The World Federation of Overseas Korean Traders Associations (World-OKTA) held a briefing session on the renewed World-OKTA app at 8:45 p.m. on May 13 for an hour via a webinar.

World-OKTA is the largest economic organization for overseas Koreans with branches in 141 cities in 68 countries around the world.

On the day when World-OKTA Chairman Ha Yong-hwa, who lives in New York, introduced the app, 1,090 Korean businesspeople from more than 40 countries, including the United States, China and Latin America, participated in the event.

“It is very meaningful to communicate online with more than 1,000 members from around the world at a time when offline meetings are difficult due to the new coronavirus infection,” said Ha.

“So far, it is has been rare for so many overseas Koreans to simultaneously go online and share their opinions.”

Meanwhile, the new app featured during the Webinar has the ability to freely select servers essential for Internet access.

Therefore it is easy to access anywhere in the world and allows real-time conversations between visitors without any special programs.

In the meantime, members have been talking and doing business on social media such as KakaoTalk and WeChat.

In the future, however, this will also be possible in the World-OKTA app, which provides services optimized for servers and mobile environments by country.