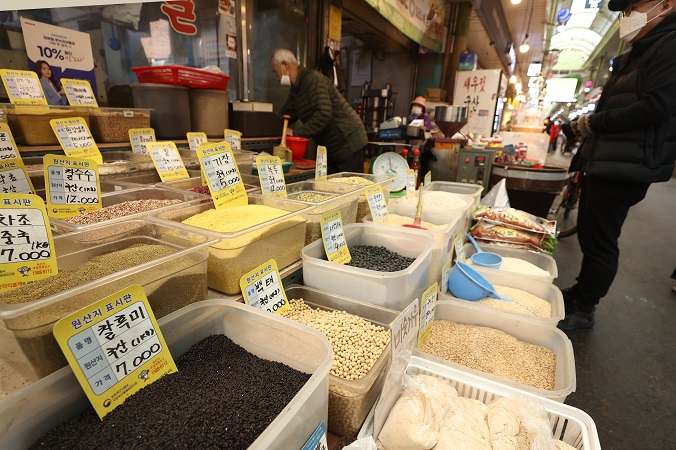 This undated file photo shows a grain store at a traditional market in Seoul. (Yonhap)

The country’s import prices of wheat amounted to US$402 per ton last month, up 8.8 percent from the previous month and the highest level since December 2008, according to the data from the Korea Customs Service and industry sources.

Compared with a year earlier, the per-ton import price shot up 41.4 percent. It was also up a whopping 54.3 percent from March 2020 in the early stage of the coronavirus outbreak.

The spike in wheat import prices was attributed to the fallout of Russia’s invasion of Ukraine and soaring ocean shipping costs stemming from a global supply chain disruption.

The per-ton import price from the United States was the highest at $475, followed by Canada with $452 and Australia with $360.

Analysts said the jump in wheat import costs is feared to drive up domestic prices of wheat-based foods and dining-out costs.

They voiced concern that wheat import prices are likely to go up further down the road due to the prolonged war in Ukraine and the global supply chain bottleneck.

In a recent report, the Korea Rural Economic Institute forecast South Korea’s unit import price index of grains for food to swell 10.4 percent on-quarter to 158.5 for the second quarter, with that for animal feed likely to expand 13.6 percent to 163.1.

South Korea’s consumer prices grew 4.1 percent on-year in March due to soaring energy prices amid Russia’s invasion of Ukraine, exceeding the 4 percent mark for the first time since December 2011.