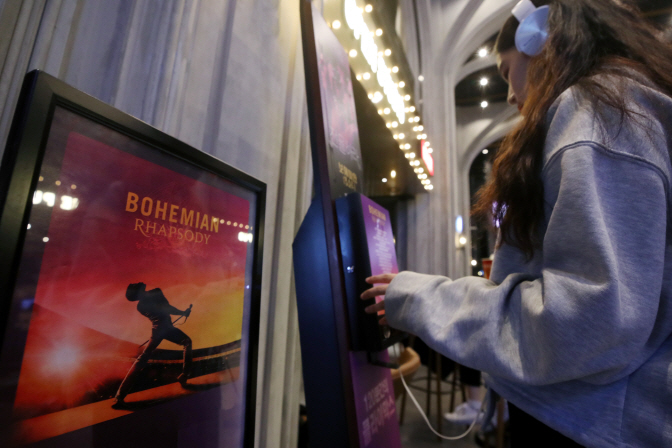 A moviegoer listens to the soundtrack of the musical film sensation “Bohemian Rhapsody” at a Seoul theater on Dec. 3, 2018. A day earlier, the film crossed the 6 million mark in the number of cumulative admissions since its release in the country on Oct. 31. (Yonhap)

SEOUL, Dec. 6 (Korea Bizwire) — South Korean moviegoers obtain an average of 3.7 pieces of information, including online reviews, before they decide whether to see a film, as films increasingly build their reputations through word of mouth, according to a survey released Thursday by the country’s largest cinema chain, CJ CGV.

The cinema chain operator held a media forum on the local film industry and its trends, in which the results of the survey were unveiled.

According to the survey, conducted in October of 1,081 moviegoers with memberships for CGV theaters, respondents placed the highest trust in Internet reviews, which people posted after going to a movie, along with previews, genres, synopses and directors, leading actors or actresses.

Movie viewers’ ratings of a movie and acquaintances’ appraisals also won high trust among them. An average 33 percent of respondents said they will not see a movie if it garners negative chatter.

Lee Seung-won, an official responsible for marketing at the cinema chain operator, said younger people, or those who go to a movie less than five times a year, show a stronger tendency to look for cinema information.

“It all suggests that it is increasingly important for us to manage word-of-mouth information on movies as viewers are highly inclined to hear from others,” Lee said.

CGV also attributed the film industry’s growth to fandom, or a subculture of fans who share feelings of empathy and camaraderie with each other.

The success of “Bohemian Rhapsody” is a typical case of fandom culture swaying the popularity of a movie.

The movie’s fame spread to younger people after it gained in popularity among people in the 40s and 50s, who experienced the music of the British rock band formed in 1970. Eight percent of those who saw the movie wanted to watch it on a second visit to a theatre.

K-pop group BTS’s tour documentary, “Burn the Stage: The Movie,” also built momentum on the fandom culture. The documentary drew 300,000 moviegoers worldwide 12 days after it was released on Nov. 15, marking the highest number of cumulative admissions among idol groups’ documentaries that have ever come out. The proportion of viewers who were seeing the movie another time accounted for 10.5 percent, a record-high among films garnering 100,000 or more viewers.