SEOUL, Aug. 7 (Korea Bizwire) — Following in the footsteps of BIGBANG, WINNER and BLACKPINK, YG Entertainment’s ambitious boy band TREASURE officially debuted Friday, with its 12 members thanking fans who have waited for the launch since the group’s creation through an audition television show.

The new group, which has four Japanese members, is formed of the final survivors of idol audition TV show “YG Jewel Box” on cable network JTBC, which aired between November 2018 and January 2019.

“It took us a long time to deliver to fans music we consider much cooler. Rather than being impatient or anxious, we became more driven to prepare more thoroughly and have much stronger goals,” TREASURE member Doyoung said at a press conference held at the CGV theater in Seoul’s Yeongdeungpo Ward.

The event was held hours ahead of the digital release of “The First Step: Chapter One,” the team’s debut single album, at 6 p.m.

Doyoung added, “Therefore, we practiced more and put more effort into the music production. We learned a lot and also grew more mature.”

Despite having no group discography under its belt, the 12-piece boy band — with the members’ ages averaging at 19 — has attracted quite a following online.

The number of preorders for the new album has also surpassed 170,000 units, a remarkable feat even for more established K-pop boy bands.

“Boy,” the main song in the new album, is a powerful electronic dance track with lyrics of a boy falling in love that are soft and sentimental in tone.

TREASURE especially tipped its hat to BLACKPINK, crediting the four-piece girl group for motivating it to work and practice hard.

“As a junior group, we’re amazed and proud of what BLACKPINK has achieved. We dream of becoming like BLACKPINK. The team has given us a lot of motivation while we prepared for our debut,” Yedam said.

As a group produced under YG, which has traditionally presented and courted music largely rooted in hip-hop with an alternative flare, TREASURE offers something new, with sounds and visuals that are more in line with other conventional K-pop groups with strong dance performance-based elements. 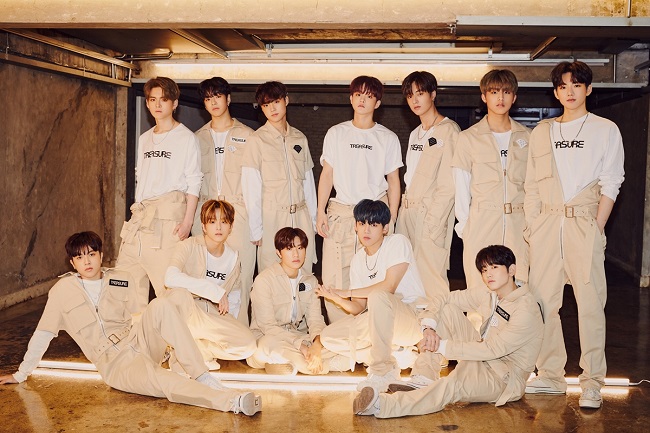 The massive 12-man line-up also represents a stark departure from the label’s previous bands with mostly four to five members, and it is more in line with acts such as NCT 127 and Seventeen. TREASURE even has two group leaders: Hyunsuk and Jihoon.

“I think we offer a ‘plus alpha’ element to the traditional YG style. We produce synergy through our cadence-heavy dance performances,” said Hyunsuk.

“We offer something fresh and differentiating, such as in the final chorus section of our new song, when all of us chant together while dancing.”

Considering the hype and anticipation surrounding TREASURE, the group has rather humble goals for now.

“Our goal is to enter the top 100 chart on Melon. Our priority is more focused on not letting down the fans rather than obsessing over the charts,” member Jung hwan said. Melon is the top music streaming service in South Korea.

As a group of young men still in their growing years, Hyunsuk noted that the members tried to read books as much as possible to develop their characters.

“We talk to each other about how we can create good-hearted influence as an artist,” said Hyunsuk. “We just want to become a team that leaves positive energy to everyone while leaving a mark in history (as an artist).”