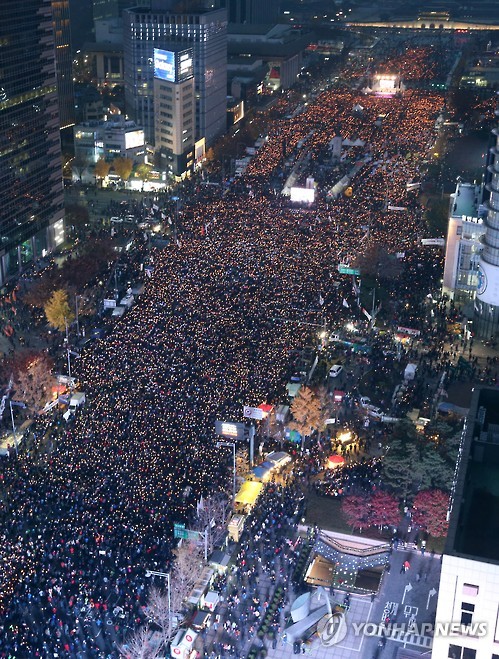 Zara Korea CEO said “49 million people (South Korea has 50 million) are doing something while you’re out on the streets”, referring to the estimated 1 million that took to the streets across the country on November 12 and 19. (image: Yonhap)

SEOUL, Nov. 24 (Korea Bizwire) – The controversy began with a tweet on Tuesday about Zara’s Korean chief, Lee Bong-jin, who allegedly made a deprecating remark in a recent lecture about the ongoing protests related to Korea’s influence-peddling scandal surrounding President Park.

According to the tweet posted by one of the lecture’s participants, Lee said “49 million people (South Korea has 50 million) are doing something while you’re out on the streets”, referring to the estimated 1 million that took to the streets across the country on November 12 and 19.

“You must be responsible for your own future,” Lee added.

The tweet instantly went viral, with SNS users criticizing the local CEO, who apparently regarded the protest participants as “doing nothing for their future”.

Following the rapid spread of his comments, Lee sent a personal message to the initial uploader, apologizing for his remarks and saying that he hadn’t intended to disparage the protesters, a message which was later shared by the uploader.

“I wanted to emphasize that we can have a better future when students make their best effort in their studies, companies in business, and employees in their work,” he wrote. “I also believe that the current political situation is unfair and unfortunate for all of us, and that such a national movement is essential for justice to be restored.”

Despite Lee and his company’s apology, online communities remain outraged. Many SNS users are even calling for a boycott of Zara products, with some of the twitter comments reading “looks like I won’t be going to Zara anymore unless that CEO guy gets fired”, “Zara’s just been added to my boycott list”, and “thanks Lee Bong-jin, for letting me know which products to boycott”.