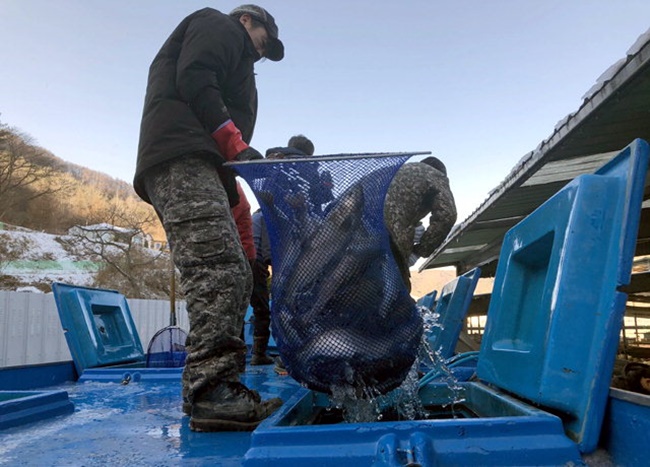 Hwacheon County announced on Wednesday that trout from across the country are being moved to a local fishing farm ahead of the annual Hwacheon Sancheoneo Ice Festival.(Image: Hawcheon County)

Hwacheon County announced on Wednesday that trout from across the country are being moved to a local fishing farm ahead of the annual Hwacheon Sancheoneo Ice Festival.

The first haul of trout weighing 800 kilograms, which left from Uljin in North Gyeongsang Province earlier this week, has arrived in Hwacheon.

After arriving in the country, the trout will then be released into Hwacheon Stream next month, two days before the event takes place.

Around 90 percent of the fish being used in Hwacheon’s annual fishing event are farmed trout, being supplied by 16 fishing farms located across the country, from various locations including Hwacheon County, YangYang County, Chuncheon County and Uljin County, to name a few.

With nearly 180 tons expected to be relocated for the event this year, event organizers face the challenge of keeping the fish fresh and healthy during the long-distance trips, some of which are over 200 kilometers.

As harsh weather conditions such as heavy snows can disrupt the transportation process, local authorities make it a priority to reduce the fish mortality rate, which can affect the success of the Ice Festival.

“Trout for the event undergo a thorough safety test. We’ll put in our best effort to present visitors with the healthiest and freshest trout at the event,” said Choi Moon-soon, the head of Hwacheon County.