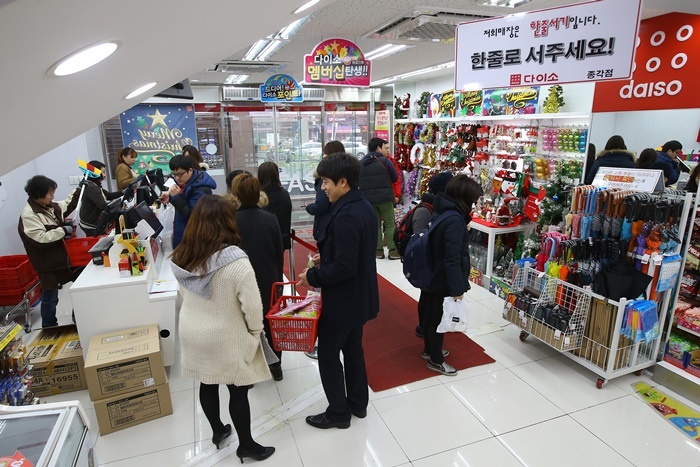 Marking its 20th anniversary this year, Daiso, which specializes in the sale of miscellaneous daily necessities, has enjoyed steady growth and success in recent years, putting itself on par with the likes of E-mart and Homeplus. (Image: Yonhap)

SEOUL, Aug. 16 (Korea Bizwire) – With South Korean dollar store giant Daiso Korea set to reach two trillion won in sales after 20 years of steady growth since its founding, concerns are growing over the negative impact of its dominance on small local businesses.

Marking its 20th anniversary this year, Daiso, which specializes in the sale of miscellaneous daily necessities, has enjoyed steady growth and success in recent years, putting itself on par with the likes of E-mart and Homeplus.

The rapid growth of Daiso, however, has put many local small business owners on alert, prompting the Korea Fair Trade Commission (KFTC) to look into unfair trade claims directed at the retail giant.

At a meeting held in April with suppliers in the retail industry, the former president of the KFTC said, “Though specialty shops have generated trillions in turnover since 1988 when they first emerged in home electronics, not enough monitoring has taken place.”

The lack of regulations governing dollar stores compared to supermarket chains like E-mart, which are prohibited from operating every other Sunday and within one kilometer of traditional markets, meant Daiso was able to grow in a more free and advantageous business environment over the last two decades.

“As Daiso grew to become a midsize company that boasts nearly two trillion won in sales, the company has expanded its business to stationary products. As it poses a great threat to the stationary industry, we want to find measures to coexist with each other,” said Lee Dong-jae, the chairman of the Korea Stationery Industry Cooperative.

The Cooperative is said to be assessing the dollar store giant’s negative impact on the local stationary business, with plans to file complaints over unfair trading practices.

Daiso was launched under the name Asco Even Plaza back in 1997 in the Cheonho neighborhood of Seoul, when Park Jung-bu, the CEO of what is now Daiso Korea revamped his brand after borrowing ideas and setting up a joint company with Daiso Japan.

Since then, stores have sprung up across the country, selling a variety of items ranging from cleaning equipment, kitchen and bathroom appliances to interior design products and party supplies, all within a price range of 1,000 won ($0.88) to 5,000 won ($4.38). 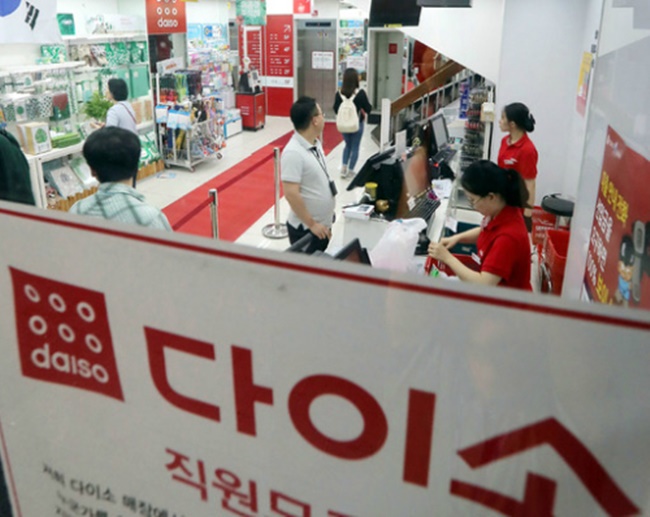 With South Korean dollar store giant Daiso set to reach two trillion won in sales after 20 years of steady growth since its founding, concerns are growing over the negative impact of its dominance on small local businesses. (Image: Yonhap)

With last year’s annual sales exceeding 1.5 trillion won, and the latest industry forecast predicting the dollar store giant to surpass the 2 trillion won mark in 2018, many believe the store’s great variety and affordability are behind its success despite the sluggish South Korean economy in recent years, which has led to the demise of many businesses.

Selling over 30,000 items, most of which are priced between 1,000 and 2,000 won, at over 1,000 locations, in the face of the growing number of single person households and declining consumer confidence in the country, has proved to be a great success.

However, there are fears that growing worries among small business owner groups and potential retaliatory actions could put a possible halt to the long-term success of Daiso Korea.