SEOUL, Jan. 10 (Korea Bizwire) — Enhypen returned with a repackage album Monday after spending a successful year as a rookie group with less than two years since its debut.

Released in October last year as the first part of the group’s new “Dimension” album series, the group’s first full album, “Dimension: Dilemma,” has since sold more than a million copies and reached No. 11 of the Billboard 200 main albums chart that month.

It was about members of a rookie boy group torn between a number of different desires after realizing the world they face after making their debut is far more complex than they thought.

In the upcoming repackage album titled “Dimension: Answer,” the boys begin to agonize over how to live and decide to find “their own answers,” refusing to accept the ones provided by society, member Jake said during a media showcase for the album.

The album’s main track “Blessed-Cursed” features a sound that combines hip-hop and elements from the 1970s’ hard-rock genre.

The song is about the boys realizing the conditions and the order of the world around them are a curse, not a blessing, and declare they will no longer be trapped.

The group performed perfectly synchronized dance moves to the strong rhythm of the song during the showcase event held both online and in-person at a music hall in eastern Seoul due to COVID-19 restrictions. 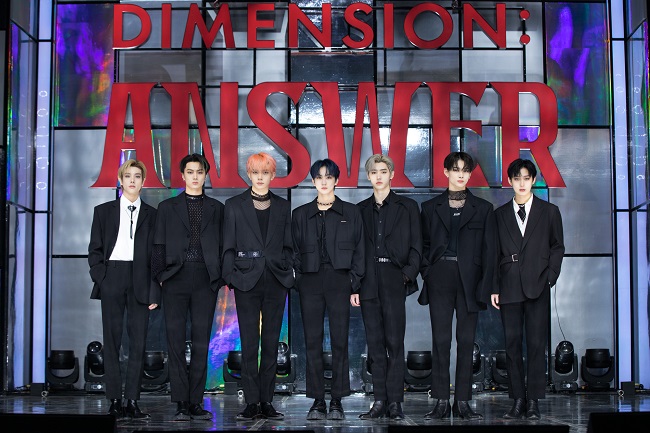 K-pop boy group Enhypen poses for photographers during a media showcase in Seoul on Jan. 10, 2022, in this photo provided by its agency, Belift Lab.

“If the main track of the first full album ‘Tamed-Dashed’ showed a refreshing charm, we will show you our strong and powerful side this time,” member Heeseung said.

Jay was confident about the quality of “Bless-Cursed” and its choreography.

“I feel the song is the most like Enhypen, and the dancing is something only Enhypen can do,” he said.

Leader Jungwon said it was the most physically demanding choreography the group has ever done, so the members had to put a lot of effort into staying in shape and not get tired early.

“BTS, as you know, is famous for its perfectly synchronized dance moves. We tried very hard to learn from their stage performances and hope to become a K-pop group recognized in that way,” he added.

The new album and the music video for its main track was released at 6 p.m.