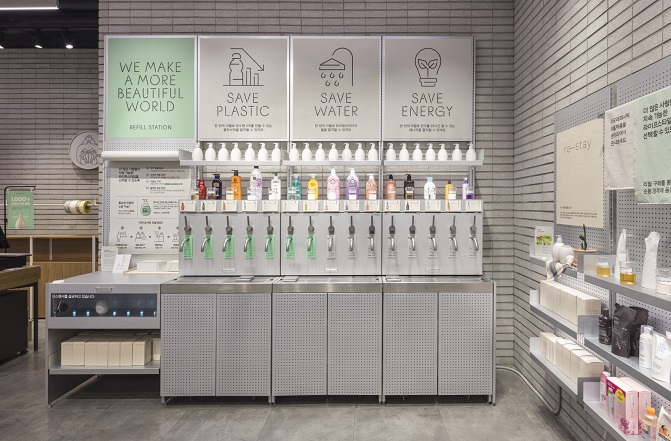 The company announced on Tuesday that it decided to run a refill station within the AmorePacific Gwanggyo store that opened last week in Suwon, Gyeonggi Province.

Customers take an empty container made of coconut shell from the store and fill it with the product of their choice, with 15 different kinds of shampoos and body washes on offer.

After filling the container with the product of their choice and measuring the weight, consumers can pay per gram.

Although the price is different by product, customers can generally fill a container at savings of roughly 50 percent compared to pre-packaged cosmetics products.

The contents for refill will be limited to those with a manufacturing date of less than 100 days. To ensure the safety of the container, it will be sterilized before being refilled.

“We decided to run the refill station to better meet the demand of the times requiring a wider variety of sales methods and the promotion of refill products,” the company said.