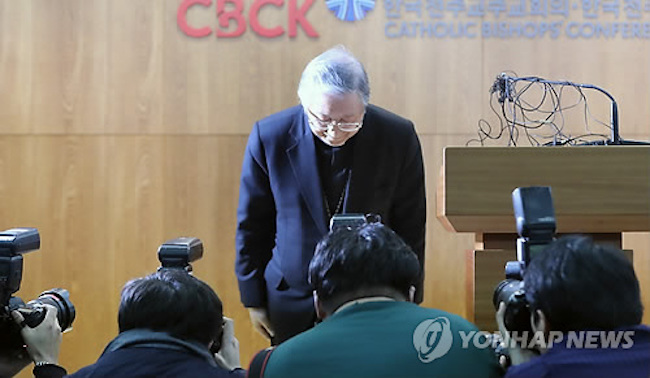 South Korea’s Catholic Church on Wednesday apologized over a priest’s alleged attempt to rape a female volunteer worker, one of the latest cases in the fast spreading “Me Too” movement. (Image: Yonhap)

SEOUL, Feb. 28 (Korea Bizwire) — South Korea’s Catholic Church on Wednesday apologized over a priest’s alleged attempt to rape a female volunteer worker, one of the latest cases in the fast spreading “Me Too” movement.

A priest at the Catholic Diocese of Suwon, only identified by his surname Han, is accused of attempting to rape a female worker multiple times during his stay in South Sudan in 2011. He admitted to most of the charges and was suspended from his duties, according to the Suwon diocese.

A non-clergy manager at the Catholic Human Rights Committee is also accused of sexually harassing a female activist in 2014.

Archbishop Hyginus Kim Hee-joong, head of the Catholic Bishops’ Conference of Korea (CBCK), held a press conference in Seoul to apologize to the victims, their families and those “who have been let down and enraged by the priesthood.”

“This sex scandal in the priesthood, which should uphold the noble value of celibacy and serve as a moral and religious compass, is disappointing and embarrassing,” he said.

Kim also explained that the Suwon diocese is pursuing legal action against Han and promised to come up with measures to help victims of sexual abuse by the priesthood.

The Catholic Priests Association for Justice (CPAJ), with which Han was affiliated, also apologized on Sunday.

“We deeply repent for the wretched actions of Han,” the progressive group of priests said. Han quit the CPAJ in light of the alleged crime.

Since a female prosecutor’s revelation last month that she was assaulted by a senior prosecutor several years ago, the Me Too movement has rippled through the various sectors of the deeply male-dominated Korean society.

President Moon Jae-in told aides Monday that he respects victims who spoke out and urged authorities to investigate the cases thoroughly.