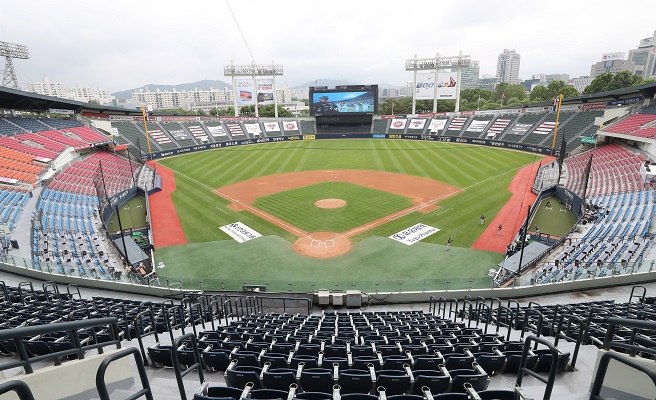 This file photo from June 25, 2020, shows an empty Jamsil Baseball Stadium in Seoul before a Korea Baseball Organization regular season game between the Kiwoom Heroes and the LG Twins. (Yonhap)

SEOUL, July 24 (Korea Bizwire) — The South Korean baseball and football leagues welcomed the government’s green light on Friday to open stadiums to fans during the coronavirus pandemic, saying their teams are prepared to execute their plan as early as the weekend.

The Central Disaster and Safety Countermeasure Headquarters led by Prime Minister Chung Sye-kyun gave the go-ahead sign to the Korea Baseball Organization (KBO) and the Korea Professional Football League (K League) to allow spectators to start attending games again, albeit on a limited basis with 10 percent of the seats available at first.

KBO teams will be allowed to take fans back in starting Sunday, and the K League will be able to follow suit starting Aug. 1.

Because of the COVID-19 outbreak, the start of the KBO’s regular season was pushed back from March 28 to May 5, and the 10 KBO teams have played the whole season to this point in front of empty stands due to infection concerns.

The K League season was supposed to have kicked off on Feb. 29 but instead it began on May 8, and the 12 teams in the top-flight K League 1 have also been playing without fans.

The government had said on June 28 that it would allow pro sports events to open up for the first time this year. But it took them nearly another month to issue the final stamp of approval due to a spike in new daily cases at the turn of the month.

The long-awaited decision comes with KBO and K League clubs dealing with financial hardships without any gate revenue this year. Even a small number of fans at this point will go a long way toward providing some relief.

There had been some frustration and discontent among sports teams and fans that it made little sense for beaches and water parks to open up while stadiums, where practicing social distancing would be easier, remained closed. 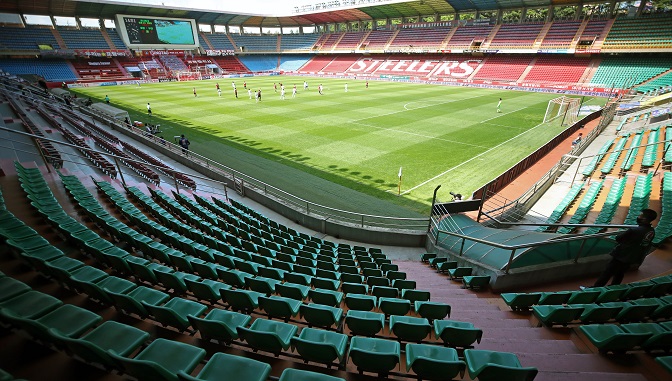 This file photo from May 10, 2020, shows a K League 1 match between Pohang Steelers and Busan IPark being played at an empty Pohang Steel Yard in Pohang, 370 kilometers southeast of Seoul. (Yonhap)

Ryu Dae-hwan, secretary general of the KBO, said clubs have been preparing for the opening of ballparks “for months.”

“Depending on their readiness (with logistics), some teams will be able to open their gates on Sunday,” Ryu told Yonhap News Agency.

K League clubs would have needed about a week to finalize their plans, and the Aug. 1 date as announced by the government fits in perfectly, a league official said.

“Our teams have been working on this all season long, and I don’t foresee any problems with this transition.” the official added.

In the KBO, the three-game weekend series is scheduled to begin across the country on Friday, and it will run through Sunday.

There will be two series in the nation’s capital, with the Doosan Bears hosting the LG Twins at Jamsil Baseball Stadium (24,150 seats), and the Kiwoom Heroes facing the Lotte Giants at Gocheok Sky Dome (16,000 seats) in Seoul. 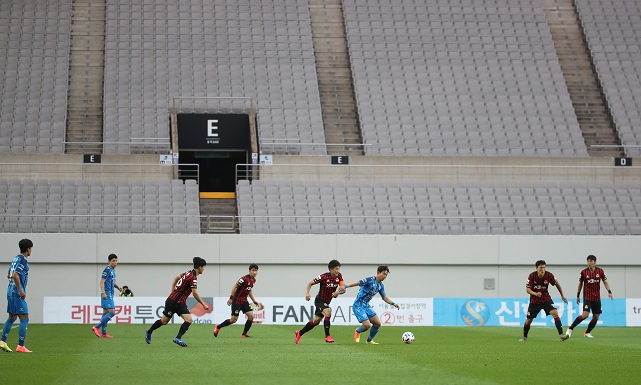 The KBO has already published a health and safety manual for fans designed to ensure a virus-free experience at ballparks.

Under those protocols, fans will be required to wear masks and sit apart from one another, even if they have company. They must go through temperature checks at the gate, and those who check in at over 37.5 C will be turned away.

Though cheering is a major part of KBO fan experience, it will be missing during the pandemic, as singalongs, chanting and other types of cheering that may include contact will be limited.

No outside food will be permitted. Concession stands will be open on a limited bases, but eating in the seats will be prohibited. Fans will have to consume their food in the concession areas.

While in their seats, fans will only be allowed to drink water and non-alcoholic beverages.

Tickets can only be purchased in advance online with credit cards so that health authorities will be able to trace contact information in case of positive COVID-19 tests. Box offices at stadiums will be closed to minimize person-to-person contact.

The KBO said fans will be strongly discouraged from buying tickets from scalpers because it is illegal, and it poses infection risks through direct contact or droplets.

In addition to these protocols, the KBO said Friday it will install an electronic entry registration system at every stadium based on quick response (QR) codes.

All fans must scan a QR code at the gate using their smartphones. Those who have trouble with those devices must write down their names and contact information by hand. Fans who refuse to do so will not be allowed to attend games.

The new system is designed to both discourage scalping and expedite contact tracing in case of positive tests.

The K League said it distributed a health manual to its clubs on June 30, which includes guidelines for fans.

Most of the measures are similar to those put in place by the KBO, including online ticketing, distancing among fans in the stands, and a ban on outside food and beverages.

The league said it will publish an updated version next Monday.