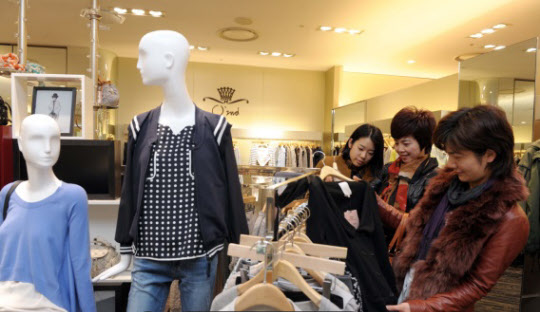 The spending power of the “youkes” was indeed impressive. (image:ShinSegae department store)

SEOUL, Korea, Feb. 12 (Korea Bizwire) – The spending power of the “youkes” (Chinese terms for tourists) was indeed impressive. During the Spring Festival (Chinese New Year) season between February 1 and 9, the number of Chinese visitors in department stores in Korea was almost three times more than the usual time, with the sales volume made to the customers from the big country to the west of Korea rising as much as 170 percent.

In addition to the luxury items hitherto preferred by the Chinese shoppers, more and more customers come to Korea these days to shop for wedding. For example, according to an official of Shinsegae Department Store, more than a half of sales revenue made to Chinese customers in all its stores was accounted for by high-priced jewelry and wristwatch items from such brands as Cartier, Bulgari, Van Cleef & Arpels. In some cases, a single customer bought items worth 30 million won or even 100 million won.

All major department stores including Lotte and Hyundai as well as Shinsegae reported a healthy increase in sales during the holiday season. Lotte Department Store said its sales made to Chinese customers for ten days between January 31 and February 9 rose 125 percent (based on UnionPay card transaction volume) from the same period last year. Chinese customers accounted for more than 80 percent in sales to foreigners for the same period.

Hyundai Department Store saw its sales to Chinese clients rise 165 percent during the seven-day period from January 31 and February 6 from a year ago (again based on UnionPay transaction figure). The main store of Shinsegae Department Store in downtown Seoul was crowded with 2,300 Chinese visitors during the first weekend of February. The whole store locations of Shinsegae reported its UnionPay card spending volume rose 174 percent from a year ago for six days between February 1 and 6.