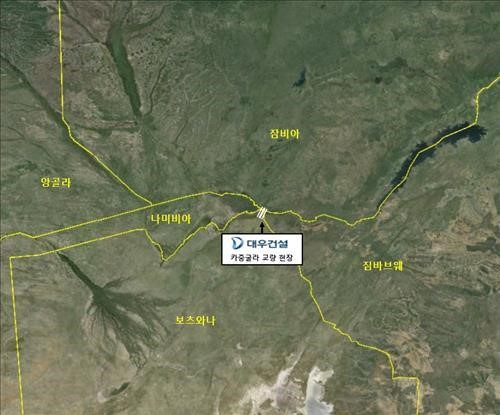 The groundbreaking is scheduled for next month and the construction is supposed to be completed within four years. (image: Daewoo Engineering & Construction)

SEOUL, Aug. 28 (Korea Bizwire) – Daewoo Engineering & Construction announced on August 27 that it won a tender for the construction of Kazungula Bridge connecting Zambia and Botswana at the price of US$161 million, equivalent to 163 billion won.

The construction contractor will build a bridge crossing the Zambezi River running along the border in the project planned by both governments. The groundbreaking is scheduled for next month and the construction is supposed to be completed within four years.

“The project, called “Southern Africa’s 40-year-long cherished construction,” will make the bridge connect the two countries for the first time, which is expected to improve the environment such as access to both nations or distribution infrastructure,” said a manager in the company. “Our accumulated experiences and technologies helped the company win the project,” he added.

It is the first time for Daewoo to carry out a project after its construction in the southern part of Africa 23 years ago. Korean construction contractors have never had an opportunity to run a project in both countries except for five projects that Deawoo used to carry out from 1986 to 1991.

The Kazungula project is expected to be a stepping stone for Daewoo to expand its influence in South Africa and neighboring nations.

Not only that, the contractor recently won additional six construction contracts, amounting to $3.39 billion, including the Kuwait’s Clean Fuels Project, the new Orbital Highway Project in Qatar and the Singapore’s Thomson-East Coast Line Project.