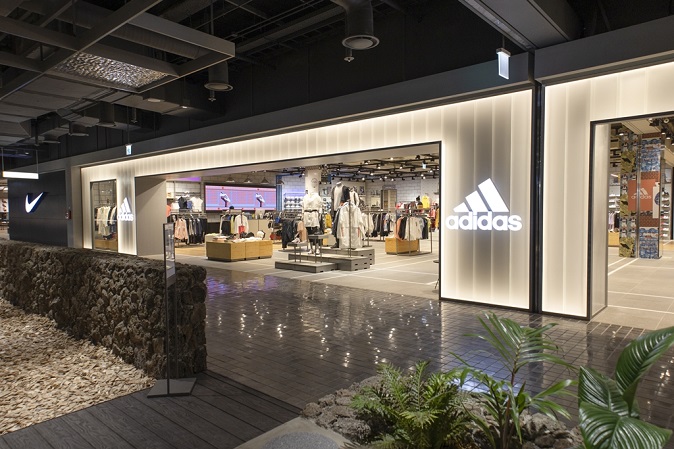 This photo, provided by Hyundai Department Store, shows the sports section of its U-Plex outlet in Bucheon, west of Seoul.

Industry leader Lotte Department Store and its main rivals Shinsegae and Hyundai department stores are targeting the MZ generation, those born between 1980 and the early 2000s as a combination of millennials and Generation Z.

Local retailers are scrambling to catch a new group of consumers as they have emerged as powerful customers who do not hesitate to spend money for personal satisfaction.

Retail giants suffered from slumps in sales this year as the COVID-19 pandemic made people refrain from visiting offline stores.

Against this backdrop, No. 3 player Hyundai Department Store reopened its U-Plex outlet targeting young customers in Bucheon, west of Seoul, on Sept. 23 for the first time in 11 years.

The store is filled with shops selling 130 trendy local and foreign brands, and its sports-focused section drew 34 brands, according to company officials.

“To cater to their demand, we plan to continue to refurbish other U-Plex stores,” a company official said.

It broke the practice of placing the cosmetics section on the first floor, moving it to the third floor of the Yeongdeungpo store.

The third floor is connected to a nearby train station, making it easier for people to visit the department store, according to company officials.

No. 2 player Shinsegae Department Store also renovated its outlet in Yeongdeungpo, aiming to nurture it as a landmark department store in southwestern Seoul.

It set up the young fashion section collecting 33 brands that appeal to customers in their 20s, the company said.