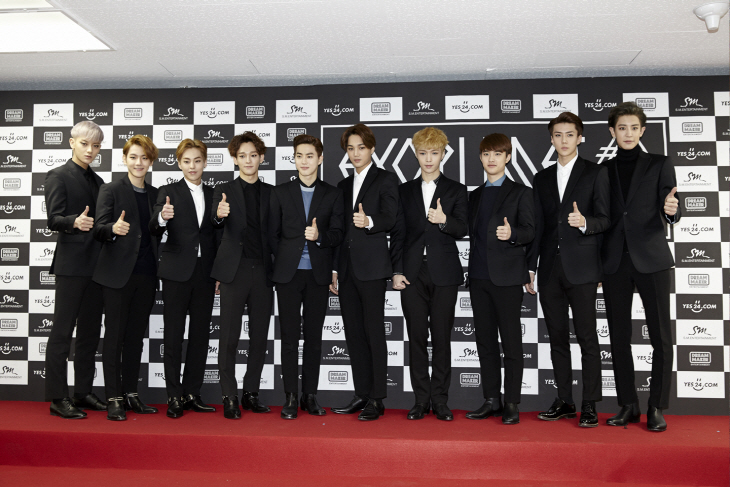 EXO’s show, entitled ‘EXO PLANET #2 – The EXO’luXion,’ was first held on March 7 and 8 at the Olympic Park Gymnastics Stadium in Bangidong, Seoul. The remaining shows are scheduled for March 13, 14 and 15. (image: SM Entertainment)

SEOUL, March 9 (Korea Bizwire) — EXO is set to become the first idol band ever to have a five-day concert series at a 10,000-seat gymnastics stadium.

The group faced adversity last year, as two former members, Kris and Luhan, left the band. However, the hurdle has been overcome, and the remaining members now stand as one of the top idol groups in Korea, and one of the few capable of attracting 70,000 concertgoers only three years after their debut.

EXO’s show, entitled ‘EXO PLANET #2 – The EXO’luXion,’ was first held on March 7 and 8 at the Olympic Park Gymnastics Stadium in Bangidong, Seoul. The remaining shows are scheduled for March 13, 14 and 15.

The group is expected to perform a total of 28 songs including ‘Growl‘ and ‘Overdose.’ A one-minute teaser version of the title song from their new album, ‘Call me baby’, will be also presented at the concert. Group-member Suho said at a press conference on March 8 that he couldn’t wait to show fans the new song’s music video, which has been already filmed.

The stage and scene for the first day of the concert series were large and extravagant, with lights and laser beams creating a fantastic SF-film like effect. A 50 meter wide main stage and an additional round platform were adorned with massive metal structures, lifts and six sliding LED displays that added even more excitement for the lucky 14,000 fans who filled every corner of the stadium for the first show.

EXO-member Chen said at the press conference that the group would perform ‘Promise,’ a song that he wrote and composed. He also said that he cried in front of fans for the first time during the performance of the song on the first day of the concert.

A mini TV series featuring EXO members entitled ‘EXO Next Door’ is scheduled to be released in April.