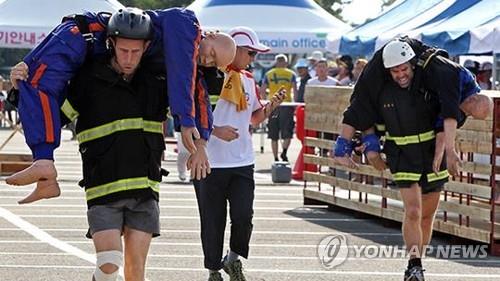 SEOUL, Sept. 14 (Korea Bizwire) — Firefighters from around the world have flocked to Chungju for a biennial event, the World Firefighters Games (WFG), held between September 10 and 18.

This is not just a sports competition. It’s more like a festival. Full time, volunteer, industrial and military fire service personnel representing 64 countries, active or retired, have come together to share friendship.

Team “Wonderful Friend” signed up for team bowling. The team was formed spontaneously just one day before the games. Each of the four members have a different nationality – Korea, New Zealand, Sweden and the United Kingdom – and also different backgrounds. Two of them are in their 70s.

“Daddy” Dennis Warner, 78, has been working for 31 years as a volunteer fighter in a small village with a population of 300 in Papamoa, New Zealand. This is his tenth participation in the games.

When asked how many medals he has won, he started counting with his fingers but soon gave up. “Countless,” said the seasoned firefighter as he burst into laughter.

Cha Han-moo, a firefighter from South Korea, met Warner for the first time at WFG Liverpool in 2008, and has been in touch ever since.

Yvonne Skogg, 73, is the wife of a retired firefighter, and has been to all of the past competitions since their inception in 1989. She did not make it to the final rounds but she seemed merrier than ever.

She said she will come to the games “until she dies.”

About 6,700 firefighters and their families are participating in the 13th WFG.

“The WFG is not simply a competition, but a festival where the entire firefighter community of the world comes together in friendship and unity,” said a National Fire Agency official.

“Everyone is enjoying the games.”