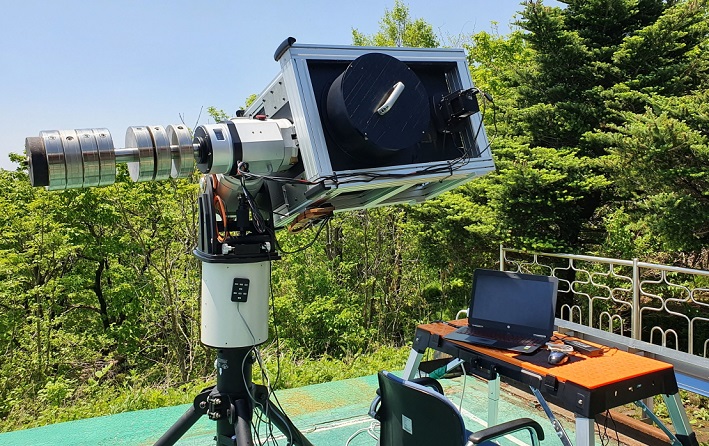 This photo, provided by the Korea Astronomy and Space Science Institute shows K-DRIFT, its newly-developed telescope.

The research team recently installed a test model of the KASI-Deep Rolling Imaging Fast optics Telescope (K-DRIFT) at the Mount Bohyun Astronomical Observatory and succeeded in observing the ultra-LSB area in the neighborhood of the NGC 5907 galaxy, which is about one thousand times darker than the night sky.

The newly-developed telescope is a small optical telescope with a caliber of 30 centimeters, but succeeded in capturing a high quality observatory image of the LSB area around a gigantic galaxy.

This was the first case in which local researchers developed the entire process of processing, assembly and alignment and succeeded in actual observation.

Off-axis free-form surface mirrors such as the K-DRIFT can capture high quality images in a wider field of view even with a small telescope, thus being able to complement heavier galaxy telescopes.

After completing the establishment of the test model observation system, the research team plans to launch the exploratory observation for the LSB areas around giant galaxies in close space later this year.