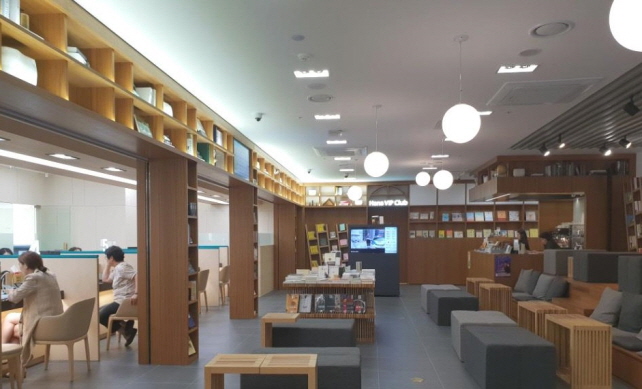 She does so not for banking but for book shopping and “meet the author” events, which are held in a space filled with the aroma of brewing coffee.

“It is a delight to spend quality time well into the night enjoying books, coffee and even beer under relaxing circumstances,” the 33-year-old said.

Part book cafe and part bank, the Gwanghwamun Station branch of KEB Hana Bank opened in May in collaboration with local bookstore brand Book by Book as part of the commercial lender’s “culture bank project.”

Carefully chosen books and a variety of events related to publications greet visitors until 10 p.m., though bank windows on one side of the space close at 4 p.m.

“The project aims at transforming traditional and often boring bank outlets into softer ones by adding non-financial content so as to make visitors enjoy, linger and come again,” a bank official in charge of the project said.

The lender said it aims to open more unique branches going forward, including one that will be set up to meet the needs of foreign visitors. 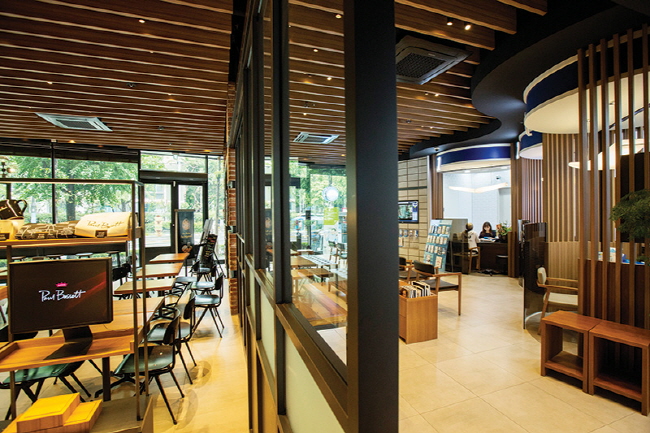 Such retail experiences exemplify the concept of “slow banking,” which has gathered popularity both at home and abroad in recent years in a sharp turnaround from banks’ long-held focus on swift processing of transactions.

The elegant changes are, in fact, part of their efforts to survive, as many are being confronted by the grim reality of more customers preferring mobile and Internet banking. The trend has accelerated the downsizing of space used by conventional brick-and-mortar lenders.

Throughout last year, transactions through mobile banking services sharply rose following the launch of Internet-only banks. In the second quarter of this year, less than one out of 10 of all money transfers were made over the counter, according to the Bank of Korea.

Against that backdrop, the country’s five leading commercial banks — KB Kookmin Bank, Shinhan Bank, Woori Bank, KEB Hana Bank and Nonghyup — shut down 312 branches last year, bringing down the aggregate number of their branches to 6,790. It was the biggest drop since record keeping began in 1989, according to the Financial Supervisory Service.

“While closing down unprofitable branches, banks have been grappling with how to make better use of their costly but indispensable spaces,” an official of the Korea Federation of Banks said.

“One idea is to provide differentiated experiences at banks and make them into major meeting points for the community so as to improve their image and induce more people to visit again and again, which can help with the customer base,” he stated.

In addition, banks can reap financial gains by renting out the otherwise idle properties and generating profits.

The first such attempt in South Korea was made by Woori Bank in March 2016 when it set up its “cafe in branch” in Seoul’s Ichon-dong by joining hands with local coffee chain Paul Bassett.

As the fresh attempt paid off, it then launched a “bakery in branch” in Jamsil three months later in partnership with Krispy Kreme Doughnuts.

There are, however, skeptics, according to Choi Eun-jin, former head of the Ichon-dong branch.

“Some people were quite doubtful if such a ‘shop in shop’ could create a synergy effect meaningful enough to offset potential side effects, such as overcrowding and security issues,” she said.

“Though we cannot say the new concept satisfies every single customer and achieved what we primarily aimed for, we’ve seen a growth in the number of visitors, and people in general appreciated the changes made,” she said. 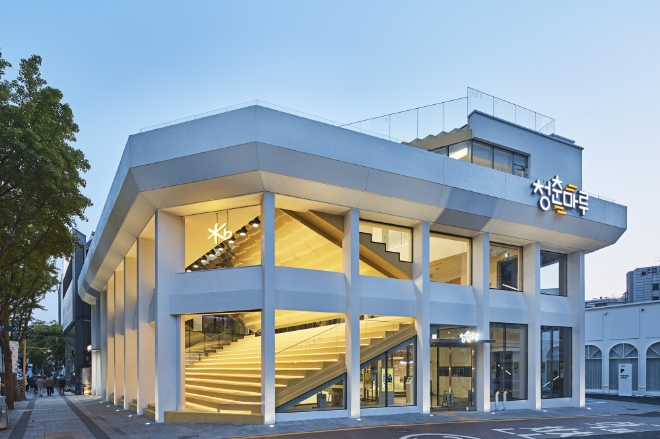 Banks have nonetheless continued to adjust their approach to making use of offline spaces and are now eyeing more specific targets.

KB Kookmin Bank remodeled its 40-year-old branch in the brisk college area of Hongdae and reopened it in April as KB Rockstar Cheongchun Maru, a culture complex for young folks. “Cheongchun” means youth in Korean, and “Maru” means floor.

The three-story building is equipped with a cafe, digital library, seminar rooms, a stage and a rooftop bar, which serve as a venue for art performances, exhibitions, lectures, group gatherings and relaxation.

“In accordance with our chairman’s emphasis on supporting young people, we’ve been making diverse efforts, and this is one of the prime examples,” a Kookmin Bank official said, citing KB Financial Group CEO Yoon Jong-kyoo.

Stating that the big yellow stairs on the first floor leading to the second has become a major landmark of the area, the banker said the physical structure itself “is also expected to help further boost the bank’s brand and image even among passersby in this trendy neighborhood.”

After four months of free access, the entrance to the building now requires membership through the bank’s mobile applications, a move that reflects its goal of attracting more customers to its business.

Gwangju Bank, based in South Korea’s southern city of the same name, targets the opposite demographic.

So far this year, the regional lender has opened three outlets reserved for senior citizens who still prefer walking into offline spaces for their banking transactions.

Though few extra facilities for the elderly were added, Gwangju Bank boasted diverse financial incentives for them such as free remittance and extra interest rates for deposits, as well as several health-related services in cooperation with local governments.

“Seeking changes is not an option but a must for banks and a natural thing in this digital-driven era,” Kim Yong-ki, a professor at Ajou University, said. “Competition to come up with better ideas on making the most use of these places will be and must be fierce down the road.”