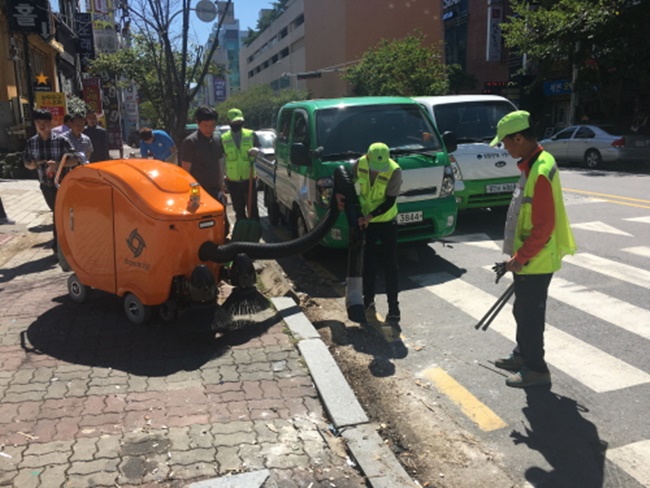 The move by district officials to trial street-sweeping robots comes with the community seeking ways to effectively deal with the issue of illegal trash dumping. (Image: Seo District Office)

GWANGJU, Sept. 15 (Korea Bizwire) — Seo District in the city of Gwangju announced on Thursday it has introduced street cleaning robots in the community that can also be operated by remote control.

The move by district officials to trial street-sweeping robots comes with the community seeking ways to effectively deal with the issue of illegal trash dumping.

Seo District’s newly deployed cleaning robots, which are 1.75 meters long, 0.94 meters wide, and 1.3 meters tall, are capable of collecting garbage on the street using their brushes, or cleaning flower beds with a hose.

With a floating population of tens of thousands traveling in and out of the neighborhood, the cleaning robots’ waste collection capacity of 100 liters and their accessibility to areas difficult to reach, such as narrow alleyways, are expected to come in handy.

The robots can detect pedestrians and other obstacles and are designed to remain a certain distance from human street cleaners to secure a safe working environment.

Including an autonomous parking system, the prevention of workplace accidents also figured prominently during the robots’ development process.

“After a trial run in Sangmu District, we will decide whether to increase the number of street cleaning robots in other neighborhoods,” said an official from Seo District Office.

“We hope this move will improve working conditions for street cleaners.”