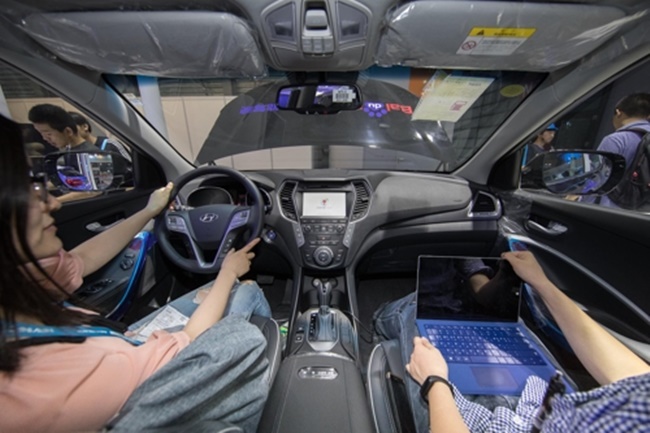 In this photo taken on June 7, 2017, and provided by Hyundai Motor Co., Chinese consumers test the navigation and voice recognition systems in a Santa Fe Tucson SUV displayed at the CES ASIA 2017 in Shanghai. (Image: Yonhap)

SEOUL, June 7 (Korea Bizwire) – South Korea’s top carmaker Hyundai Motor Co. said Wednesday it will work with Chinese technology giant Baidu, Inc. to develop a navigation system for its vehicles that will be sold in the world’s biggest auto market.

Hyundai and Baidu will jointly develop “Baidu MapAuto” and a voice recognition system called “Duer OS Auto” so the two systems can be incorporated in the carmaker’s two new models to be launched in China later this year, the company said in a statement.

“The partnership with Baidu is aimed at attracting young Chinese consumers who show a growing interest in smart gadgets and connected vehicles. Most of all, their purchasing power is growing,” a company spokesman said.

The carmaker didn’t provide details about the two “connected” vehicles but said the systems will also be applied to upcoming models next year.

At the CES ASIA 2017, the consumer electronics and consumer technology trade show to be held in Shanghai from Wednesday to Friday, Hyundai unveiled a Santa Fe SUV equipped with the Baidu MapAuto and Duer OS Auto systems in a test project.

Under the theme of “Cooperative Mobility Ecosystem,” Hyundai plans to also promote its advanced technologies in the Ioniq electric autonomous car, a hydro-electric concept car and three wearable robots, the statement said.