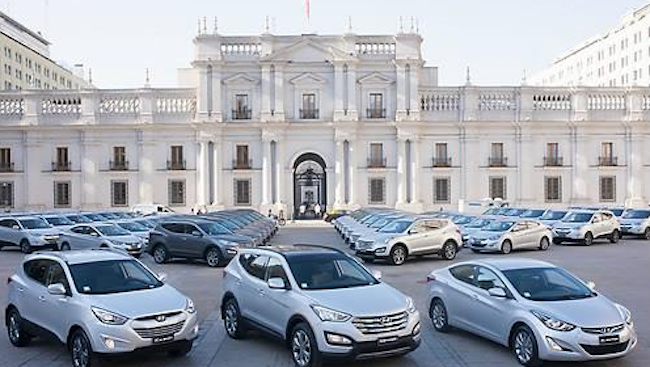 In the January-July period, Hyundai’s sales in the Latin American market grew 11 percent on-year to 17,276 vehicles, while Kia’s sales grew 5 percent to 16,341 units. Their sales growth rates were lower than those of rivals, such as Toyota Motor Corp. and General Motors Co., according to the Korea Trade-Investment Promotion Agency (KOTRA).

For the same seven-month period, sales of GM’s Chevrolet brand jumped 32 percent from a year earlier to 18,110 cars, and Toyota’s figures increased 20 percent to 14,214, according to the agency.

“Japanese and U.S. carmakers have placed their vehicles in the Chilean automobile market with steep discounts on the back of their currencies’ weakness. This has helped boost their car sales in the emerging market,” a KOTRA spokesman said.

But Korean carmakers had little room for discounts due to the won’s strength against the U.S. dollar and the Japanese yen. A lack of competitiveness resulted in a slowdown in sales growth, he said.

A stronger won lowers the value of dollar-denominated overseas earnings when a company converts them into the local currency.

Hyundai and Kia ranked first and second in terms of sales in Chile in the January-July period of last year, respectively, but in the same period this year, GM’s Chevrolet topped the sales rankings, with Hyundai and Kia taking the second and third slots, KOTRA said.