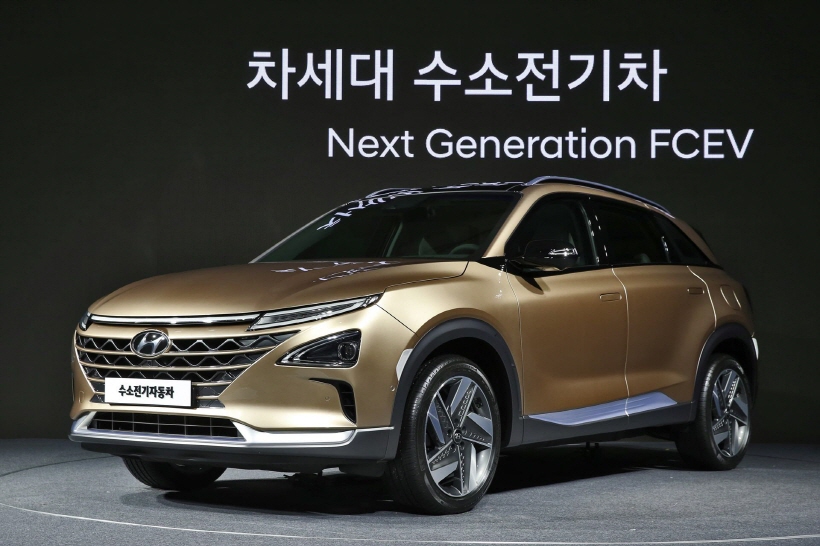 The country’s biggest carmaker by sales introduced its first fuel-cell electric car based on the Tucson SUV in 2013. But it has mainly provided the vehicle to public organizations due to high prices and lack of the charging infrastructure.

“We are now putting a bigger focus on developing the ‘ultimate’ environment-friendly vehicles, such as all-electric and fuel-cell electric cars,” Hyundai Motor Senior Vice President Lee Ki-sang said in a press conference held to unveil the next-generation vehicle.

To boost the sale of fuel-cell electric models, Hyundai Motor will closely cooperate with the government to increase the number of chargers and promote public awareness about eco-friendly cars, Executive Vice President Lee Kwang-guk said.

Hyundai Motor also plans to introduce an all-electric Genesis sedan in 2021, the company said in a statement. It sells Genesis sedans as an independent brand as Toyota Motor Corp. does with its Lexus models.

The electric Genesis will be the high-performance, long-range electric car to be sought by Hyundai Motor, the executives said.

The move comes as Hyundai Motor struggles with a lack of new models, particularly SUVs, and declining sales in major markets, such as China and the United States.

“Hyundai aims to take the lead in the eco-friendly vehicle markets with the launch of the new fuel-cell electric car. With the pure electric Genesis model, it will globally compete with Tesla Motors Inc.’s luxury Model X and Model S in the long term,” a company spokesman said.

The new fuel-cell electric SUV can travel more than 580 kilometers on a single charge, he said.

In extended efforts to strengthen its electric car lineup, the carmaker plans to launch the electric version of the Kona subcompact SUV with a driving range of 390 km in the first half of 2018, it said.

The electric version of the luxury Genesis sedan will have a range of 500 km on a charge. The range is similar to the driving ranges of 400 km-540 km for Tesla’s Model S and X.

All the planned launches are in line with Hyundai Motor Group’s renewed goal of introducing 31 eco-friendly models in global markets by 2020. The world’s No. 5 automaker by sales previously targeted to launch 28 eco-friendly cars.

The two carmakers have suffered sharp sales declines in China amid diplomatic rows between the two countries over the deployment of an advanced U.S. missile defense system in South Korea.

China has taken measures against South Korean products and the sale of group travel packages to its neighboring country in an apparent retaliation against the deployment. Beijing has argued the system could spy on its military though Seoul has said it is aimed at countering missile threats from North Korea.