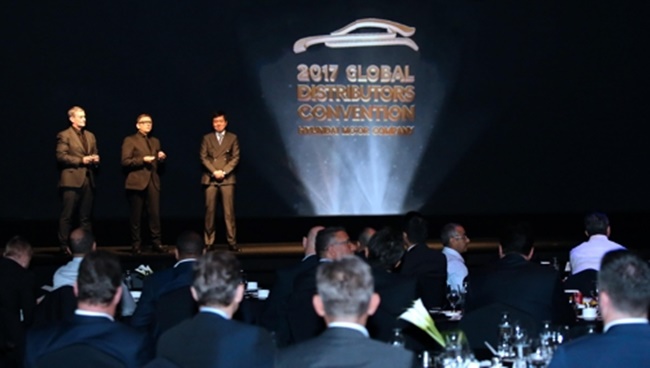 In this photo taken on May 11, 2017, and provided by Hyundai Motor Group, (from left) Luc Donkerwolke, head of Hyundai Motor Design Center; Peter Schreyer, chief designer for both Hyundai Motor and Kia Motors; and Lee Sang-yup, head of Hyundai & Genesis Styling, host a briefing on the carmaker’s marketing and design strategies during the 2017 Global Distributors Convention held from Wednesday to Saturday in South Korea. (Image: Yonhap)

SEOUL, May 11 (Korea Bizwire) – The vice chairman and heir apparent of Hyundai Motor Co., South Korea’s leading carmaker, on Thursday told the company’s global salespeople that the company will churn out new vehicles and make necessary investments in technologies that will make it more competitive.

On the second day of the 2017 Global Distributors Convention being held from Wednesday through Saturday in Seoul and Jeju Island, Chung Eui-sun stressed, “We will continue to support our sales networks and people by delivering new technologically advanced vehicles tailor-made to meet the demands of customers,” he said at a gathering in Seoul.

Some 300 salespeople from 105 countries participated in the annual event being held this year under the theme of “50 Years and More – Wonderful Journey Together.”

Hyundai plans to launch the Kona compact crossover and the Genesis G70 luxury sports sedan this year to diversify its lineup and bolster sales in major markets such as the United States.

The South Korean carmaker has suffered declining sales in the U.S., China and emerging markets due to a lack of new models in recent months.

Low oil prices pushed up sales of gas-guzzling SUVs in the U.S. but Hyundai lacks in competitive SUV models compared to its Japanese rivals such as Toyota Motor Corp. In China, local campaigns against Korean products amid a row over the deployment of a U.S. anti-missile system in South Korea is expected to weigh on its car sales there for the time being.

Hyundai and its sister company Kia Motors Corp. sold a combined 51,059 vehicles in China in April, down 65 percent from 146,378 units tallied a year earlier.

The sharp decline in sales came amid escalating tensions between Seoul and Beijing over the stationing of the Terminal High Altitude Area Defense (THAAD) system on South Korean soil.

China has explicitly opposed the THAAD deployment, arguing the system could be used against it. Seoul and Washington countered that the system is only aimed at defending against nuclear and missile threats from North Korea.

While in the U.S. market, Hyundai saw its sales drop 4.3 percent year-over-year to 225,288 vehicles in the January-April period. Kia’s sales declined 11 percent to 181,088 units during the same period.

Hyundai’s vehicle sales didn’t include sales figures of its luxury Genesis models. The Genesis sedans are sold separately under the independent Genesis brand in global markets.

Hyundai and Kia together are the flagships of Hyundai Motor Group, the world’s fifth-largest automotive conglomerate. They aim to sell a combined 8.25 million vehicles this year, up from 7.9 million autos sold globally last year.