SEOUL, Nov. 30 (Korea Bizwire) — Kai, a member of popular K-pop boy group EXO, said Tuesday he wanted to show his new side “as sweet as a peach” in his new release as an individual artist.

“If I had a weighty image as an EXO member and individual artist, I wanted to show a sweet, friendly and cute side of me this time as the title of the new song ‘Peaches’ indicates,” the singer said during an online press conference here to promote the release.

“Peaches” is the title track of his namesake second EP album set to hit various music streaming services at 6 p.m.

It is a medium tempo R&B genre number with an addictive melody and a heavy 808 bass. The song’s lyrics liken the romantic moments a man spends with his lover to a sweet peach and depicts his wish to be together with her forever in a paradise-like space.

“I expressed everything with the just one keyword of ‘peach,’” Kai said. “This song stretched my imagination, so I chose it as the title track. I liked its dreamy atmosphere and the overall feeling and thought it was just the right one for me.”

The album was the first release from the artist after his first EP “Kai” came out exactly a year ago. The album topped iTunes top albums charts in 55 regions around the world and major domestic music charts upon its release. 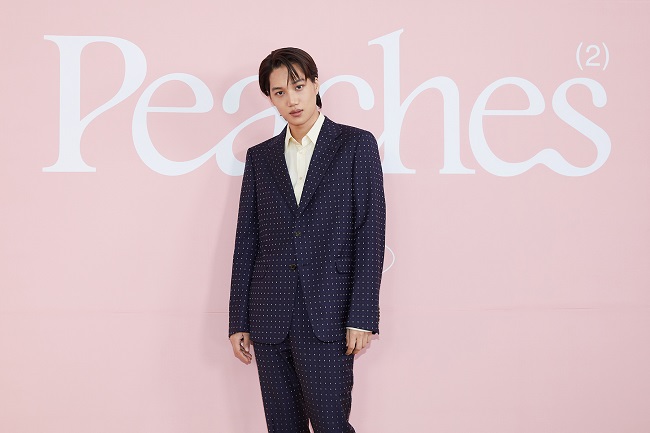 EXO’s Kai poses for the camera during an online press conference to promote his new EP as an individual artist on Nov. 30, 2021, in this photo provided by his agency, SM Entertainment.

It took him a year to release a new album, but he confided he could not work with ease as a versatile talent who also regularly appears on television variety shows while doing group activities as an EXO member.

“I was torn between what I wanted to do and what I could do realistically, so I always had to compromise and try to find the best midpoint,” he said, shyly adding that the upcoming album is the result of such an inner struggle and a compromise.

But he stressed that he tried to give his all to the new album so he had no regret.

When asked if there was something new he wanted to show through the album, Kai was quick to answer, “A diverse side of me.”

“Even if it has the same Oriental atmosphere as others, I want to show what only Kai can do and a new side of me. I want to show something people can expect from me when they see me.”

With a bright smile, he added he hopes to earn a modifier, “more lovely than thought,” through the album.