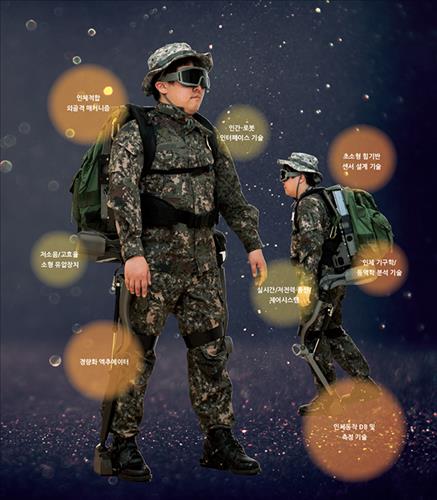 “Ironman” wearable robots, or exoskeleton robots with enhanced power and multiple features for combat, are currently being developed by various companies. (image: Yonhap)

“Ironman” wearable robots, or exoskeleton robots with enhanced power and multiple features for combat, are currently being developed by various companies.

For instance, Hyundai Rotem, a Hyundai Motor Group company, is developing technology to control a wearable robot’s walking with high reactiveness for rugged terrain. With the technology, one can walk at a speed of six km/h with 50kg of weight through flatlands, on stairways and steep slopes, and pass through vertical obstacles and trenches.

These wearable robots enable soldiers to carry heavy weapons to the front lines in rugged terrains that only vehicles can reach. However, the robots need high power actuators and highly responsive controller technologies.

The company expects that the robotic suits will evolve more to fit combat support such as carrying out military engineering missions and logistics, and carrying heavy weapons by augmenting human power. It even expects that wearable robots will be the combat platform for soldiers in the future.

An official at LIG Nex1 said, “As most Korean territory is mountainous, the wearable robots will be developed to fit such an environment. Fundamentally, we will develop the exoskeleton robots that all the soldiers in the world will wear, and become Ironmen on the battlefield.”