SEOUL, Feb. 23 (Korea Bizwire) — K-pop songstress Sunmi is back with another new album to add to her discography of songs with striking concepts of feminist empowerment combined with a bold performance and a twist of wordplay.

The singer on Tuesday unveiled two songs for her new EP — “Tail” and “What the Flower” — in a press conference streamed online amid the new coronavirus.

The album titled “Tail” after the lead track, is her first album in roughly six months since the romantic summer number “Pporappippam.”

Like her hit tracks “Lalalay” and “Gashina,” Sunmi incorporated wordplay to create contrasting concepts. “Lalalay,” for instance, is often used in Korean as a slang term for a naughty person but also refers to the traditional Korean reed wind instrument “taepyeongso.”

“Tail” refers literally to the tail of an animal and is also used as part of the Korean phrase that means to seduce someone.

“What the Flower,” a collaboration with K-pop acts Crush and Taeyeon of Girls’ Generation, is apparently a phrase that refers to an English slang phrase. She used similar wordplay for its Korean title.

“The word ‘tail’ somehow captured me. The fact that animals use their tails to express their feelings and how that comes as an instinct for them and is not something that’s made up made the concept charming,” Sunmi explained.

“I also hope you pay attention to the English title of the song ‘What the Flower,’ which makes a twist from the English slang,” she added. 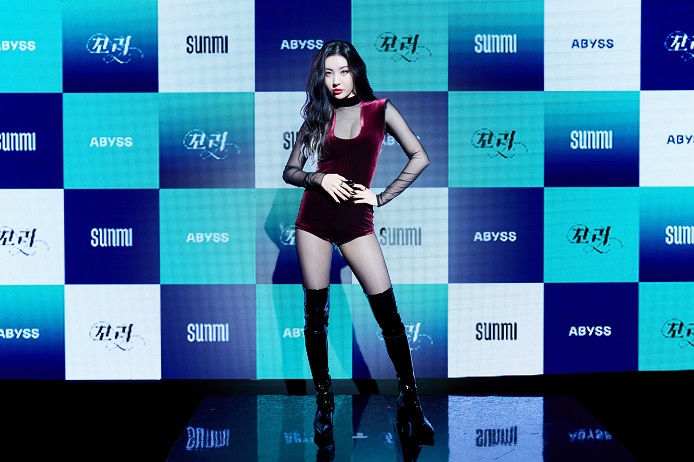 Sunmi, known for her bold and unique choreography, said she tried to visualize a cat’s tail through her dance moves for the new song.

For the task, she worked with renowned choreographer Janelle Ginestra who has done choreography for singers like Beyonce and K-pop act Red Velvet.

“Since us humans don’t have tails, I thought a lot about this and how animals use their tails to express their feelings,” she said.

“I told Ginestra it doesn’t matter if the moves are too bold. I want to have moves that really portray an animal. I’m really satisfied with what came out.”

Sunmi, who has wowed her fans with different, powerful concepts with each solo release, said while she has no big ambitions for the two songs, they are meaningful in that they mark the beginning of her thirties.

“I don’t have gigantic goals I want to achieve with ‘Tail’ and ‘What the Flower.’ But they are special in the sense they mark the beginning of my thirties. I feel as if I’m starting off my thirties with a confident and bold first step,” said the singer who turned 30 in Korean age this year.

Now in her 15th year as a K-pop singer, Sunmi has carved out a unique musical style with her confident vibe and powerful lyrics that don’t conform to industry stereotypes. Sunmi said this kind of “voice” is probably what has built her fanbase.

“I think I consistently try to speak up and tell my story,” she said. “This isn’t a loud voice but maybe it’s because it’s not a loud voice that people seem to pay more attention to it. I’m thankful for that. That people are listening to me.”