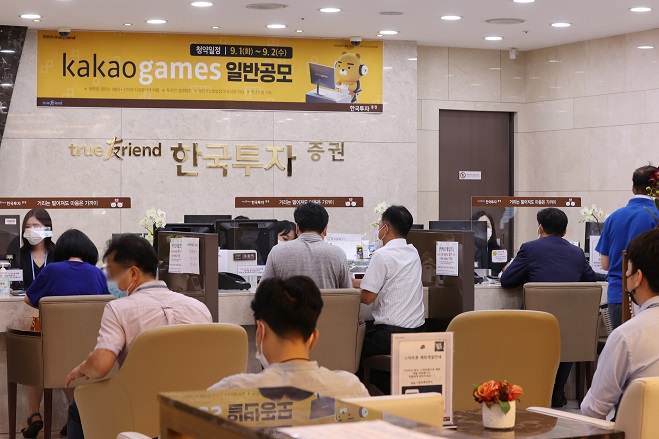 Three IPO managers said Kakao Games shares were oversubscribed by 1,524.85 times by general investors as of 4 p.m., the deadline for a two-day public subscription.

The figure is far above the previous record IPO subscription rate set by SK Biopharmaceuticals earlier this year, which was 323 times oversubscribed.

Based on the completion rate, subscription deposits for Kakao Games shares were estimated at 58.55 trillion won (US$49.4 billion), almost double the 30.99 trillion won deposited for SK Biopharmaceuticals’ IPO.

Kakao Games will sell a total of 16 million shares through its upcoming debut on the tech-heavy KOSDAQ market, of which 20 percent, or 3.2 million, are allocated to individual investors.

The game affiliate of Kakao Corp., which operates the country’s most-used mobile messenger KakaoTalk, plans to sell the new shares at a price range between 20,000 won and 24,000 won as part of its efforts to hone its competitive edge.

Kakao Games hopes to raise between 320 billion won and 384 billion won via the IPO, with the proceeds to be used in developing a lineup of new games.

Kakao Corp. owns the largest 58.96 percent stake in Kakao Games, which has been broadening its presence not only in South Korea but across Asia with the help of KakaoTalk after its inception in April 2016.