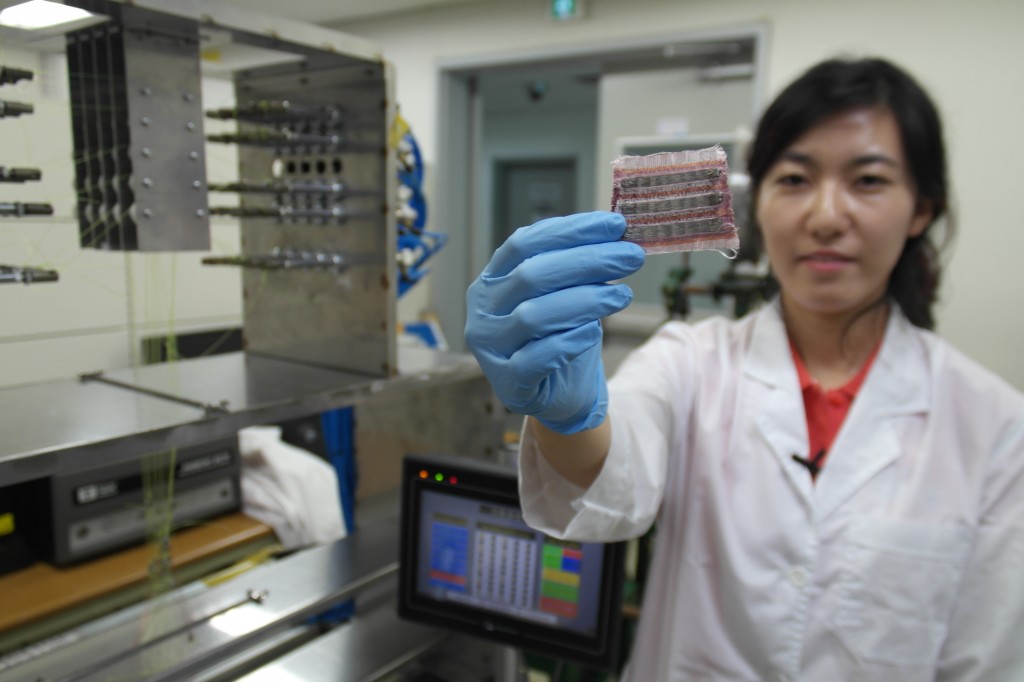 The new technology is expected to have wide applications.(image:KERI)

SEOUL, Aug. 22 (Korea Bizwire) – A technology to weave photovoltaic cells like the fabric has been developed by a research team in Korea. The Korea Electrotechnology Research Institute under the Ministry of Science, ICT and Future Planning said on August 21 that its research team led by Cha Seung-il and Lee Dong-yoon at the Nano Fusion Technology Research Center has succeeded in developing the weavable dye-sensitized solar cell.

Lately the so-called wearable device that can be worn like clothing is all the rage. Since the launch of “Google Glass” last year, Samsung, Sony, and Qualcomm have followed up with their own versions of wearable devices in wristwatch and band-type models.

Smart glasses, smart wristwatches, smart bands, and smart shoes are all such wearable devices. The range of applications is also on the rise from military and firefighting to more consumer areas such as health management, infotainment, and human ability improvement. 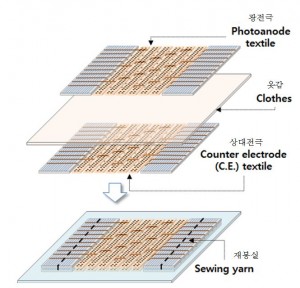 The research team at the Korea Electrotechnology Research Institute got around these problems by making the electrodes and applying the screen printing process.(image:KERI)

How to supply electric power to these wearable devices has been one of the most serious issues in commercializing the technology. It is expected the latest technology can address the deficiency as it generates the sufficient amount of electricity through photosynthesis. The weavable solar cells are as flexible and soft as any fabric, with characters of being sewn and cut.

Even though efforts to develop fabric-like solar cells have been made in many countries, most of the projects faced difficulties as the fabrics they developed were unable to perform under conditions of high tensile pressure or friction. The research team at the Korea Electrotechnology Research Institute got around these problems by making the electrodes and applying the screen printing process.

The new technology is expected to have wide applications. For example, in the current generation of wearable devices such as Google Glass and Samsung Gear the latest breakthrough can supply electric power in the form of glass band or wristwatch band.

In addition, it can be used as fabric for tarps or tents, which can act as a power source in place of heavy batteries. It can have military applications as well. According to a report by the research institute in June 2012, military barracks, combat backpacks, and helmets can generate electricity using the flexible solar cell technology.