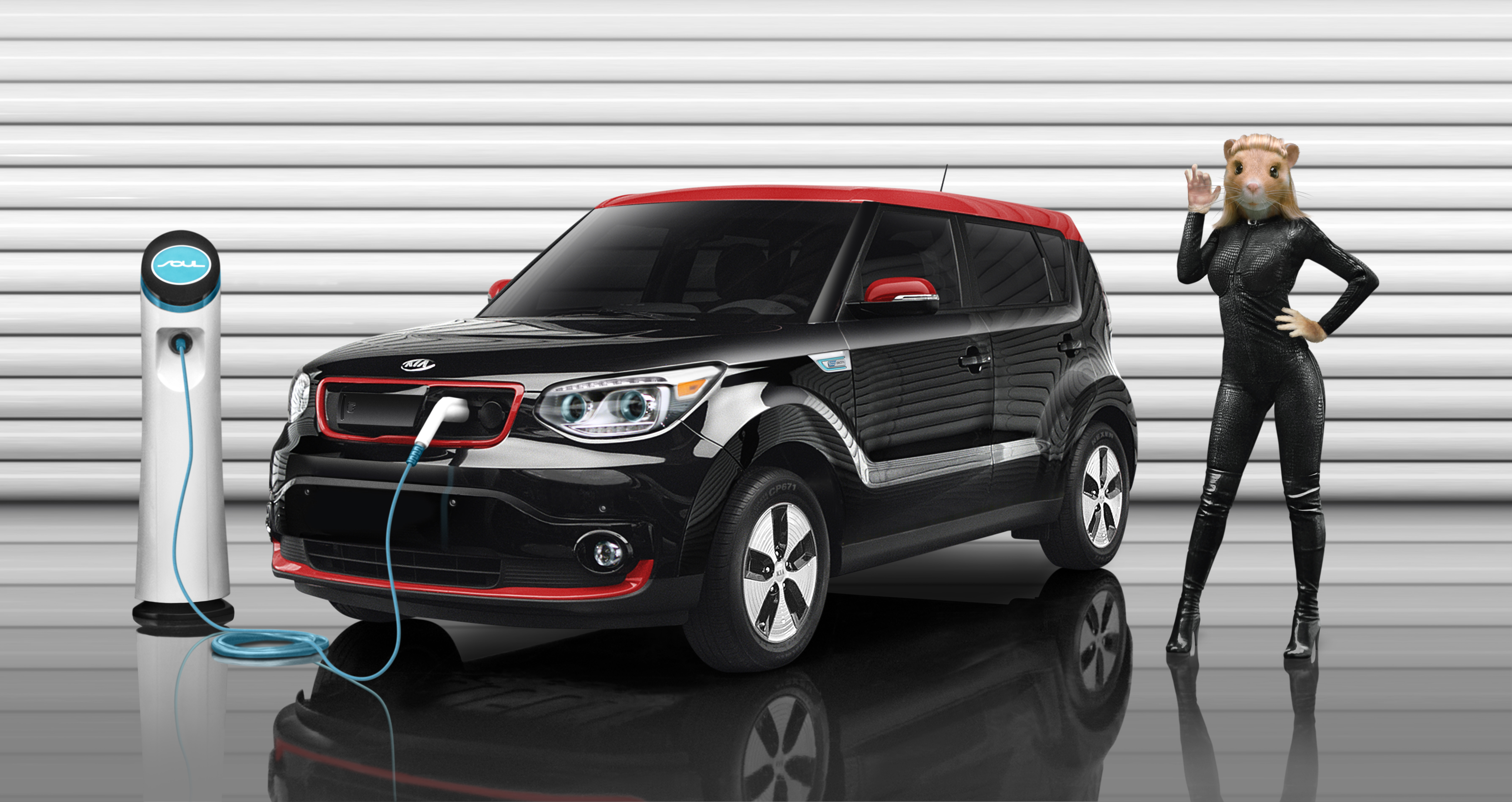 Since bursting on the scene in 2009 as “a new way to roll,” the funky Soul urban passenger vehicle has become a genuine phenomenon, with U.S. sales of the iconic people mover increasing every year. (image credit: Kia Motors America)

IRVINE, Calif., August 21, 2014 – Since bursting on the scene in 2009 as “a new way to roll,” the funky Soul urban passenger vehicle – and an accompanying trio of music-loving hamsters – has become a genuine phenomenon, with U.S. sales of the iconic people mover increasing every year. Now, with “geek chic” newly added to the dictionary, the latest installment of Kia Motors America’s (KMA) award-winning ad campaign finds the hamsters inhabiting a high-tech, high-energy laboratory and unleashing their inner mad scientists to create the most innovative and eco-friendly Soul yet.  Set to the infectious beat of Maroon5’s never-before-heard song “Animals,” sparks fly and jaws drop when a surge of electricity leads to the discovery of a furry new friend and the all-electric, zero emissions 2015 Soul EV.  As part of the multi-platform “Fully Charged” campaign, Kia.com is exclusively offering 200,000 free downloads1 of “Animals” before its release on iTunes®2.

Created by David&Goliath, Kia’s advertising agency of record3, an extended cut of “Fully Charged” is available now at Kia.com/KiaSoul before the spot’s broadcast debut during the MTV Video Music Awards on August 24.

“From hip-hop to pop, the hamsters have always had an ear for music and their paws on the pulse of pop culture.  This year, the smartly dressed trio are breaking new music from Grammy Award-winners Maroon5 and celebrating the expansion of Kia’s line of eco-conscious vehicles by sharing ‘Animals’ for free at Kia.com,” said Michael Sprague, executive vice president of sales and marketing, KMA.  “Kia is recognized as one of the 50 Best Global Green Brands4, and with the Soul EV about to shake things up in a category not known for head-turning good looks, the hamsters are out to prove that eye-catching style and eco-efficiency are no longer mutually exclusive.”

Soul Advertising Background
With a wide variety of soundtracks ranging from the classic hip-hop track “The Choice Is Yours” by Black Sheep and LMFAO’s smash hit “Party Rock Anthem” to last year’s “Applause” by Lady Gaga, Kia’s music-loving hamsters have become some of the most-watched advertising icons of all time, and the Soul’s ongoing popularity is a driving force behind increased awareness and consideration for the Kia brand as a whole.  Earlier spots depicted city and suburban streets inhabited exclusively by hamsters who mindlessly run in place inside their exercise wheels and cleverly compared “This,” the funky and uniquely styled Soul, to “That,” a number of boring and mundane appliances on wheels, cardboard boxes or hamster wheels.

With more than 20 million views, 2011′s “Share Some Soul” was the third most-watched automotive ad in YouTube history at the time of the campaign launch, and later that year, the Madison Avenue Advertising Walk of Fame named the hamsters as their first-ever “Rookie of the Year.”

“Over the last six years, the Kia Soul and the hamsters have evolved together,” said Colin Jeffery, chief creative officer, D&G.  “In 2013, the Soul was totally transformed, so it made sense for the Hamsters to become just as sleek and sophisticated.  This year, we were tasked with introducing Kia’s first electric vehicle in the U.S., and to suit their smart new ride, the hamsters started hitting the books instead of the gym. Smart is the new sexy, and the hamsters are using their wits, and a fortuitous lab accident, to their advantage.”

All-New 2015 Soul EV (#KiaSoul)
Scheduled to go on sale in the third quarter, the all-electric, zero-emissions Soul EV is the centerpiece of Kia’s Clean Mobility program and the brand’s first-ever mass-marketed electric vehicle.  While it retains the funky style and functionality Soul is known for, the EV variant introduces new and more aerodynamic styling cues and is the first vehicle in the world to receive Underwriters Laboratory’s (UL) environmental validation for its integration of 10 percent bio-based material in the interior.  A state-of-the-art 27 kWh lithium ion polymer battery powers an 81 kW electric motor, producing 210 lb.-ft. of torque, which drives front wheels and is expected to yield a range of approximately 80-100 miles of real-world driving on a full charge, with internal testing and evaluation results exceeding 100 miles in some instances.

About Kia Motors America
Kia Motors America (KMA) is the marketing and distribution arm of Kia Motors Corporation based in Seoul, South Korea.  KMA proudly serves as the “Official Automotive Partner” of the NBA and LPGA and surpassed the 500,000 annual sales mark for the second consecutive year in 2013 following the launch of seven all-new or significantly redesigned vehicles.   KMA offers a complete line of vehicles, including the rear-drive K900** flagship sedan, Cadenza premium sedan, Sorento CUV, Soul urban passenger vehicle, Sportage compact CUV, Optima midsize sedan, Optima Hybrid, the Forte compact sedan, Forte5 and Forte Koup, Rio and Rio 5-door sub-compacts and the Sedona midsize multi-purpose vehicle, through a network of more than 765 dealers across the United States.  Kia’s U.S. manufacturing plant in West Point, Georgia, builds the Optima* and Sorento* and is responsible for the creation of more than 14,000 plant and supplier jobs.

2 iTunes is a registered trademark of Apple Inc. All rights reserved.