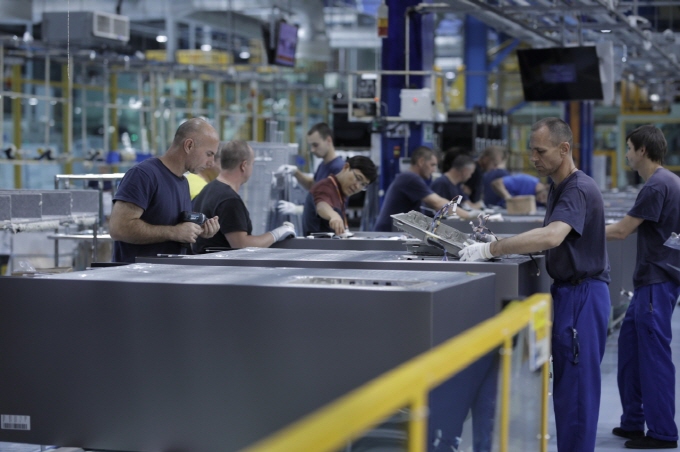 This photo taken by Samsung Electronics Co. in 2018 shows factory workers at the company’s manufacturing plant in Poland.

SEOUL, March 19 (Korea Bizwire) – South Korean companies operating in Europe are on high alert after the European Union (EU) imposed a 30-day entry ban on travelers outside the bloc to stem the spread of the novel coronavirus, industry sources said Thursday.

The European Union (EU)has decided to shut its borders and enforce travel restrictions on non-EU citizens after the region accounted for one-third of global COVID-19 cases.

South Korean firms in Europe have beefed up their quarantine measures and are making contingency plans for possible disruption to their supply chains.

“Although European nations are shutting their borders, they are not blocking freight transport,” an official from a local EV battery maker said on condition of anonymity.

“There has not been a major logistics problem, but we are seeing some delays in delivery time and it is getting difficult to secure transport means.”

EV battery makers said that they are also concerned about factory shutdowns among automakers, their major customers.

Carmakers such as Volkswagen and Ford recently announced the closure of their European plants due to the novel coronavirus.

“It’s difficult to assess the impact of the outbreak as the novel coronavirus is now sweeping Europe after the situation in China has somewhat cooled down,” another official at an EV battery firm said.

“Our European plant is operating as normal, but people there are concerned because no one knows what is going to happen next.”

Some local EV battery makers also run plants in the United States, and as the virus is also spreading quickly there, the companies said they are also worrying about their businesses in the world’s No.1 economy. 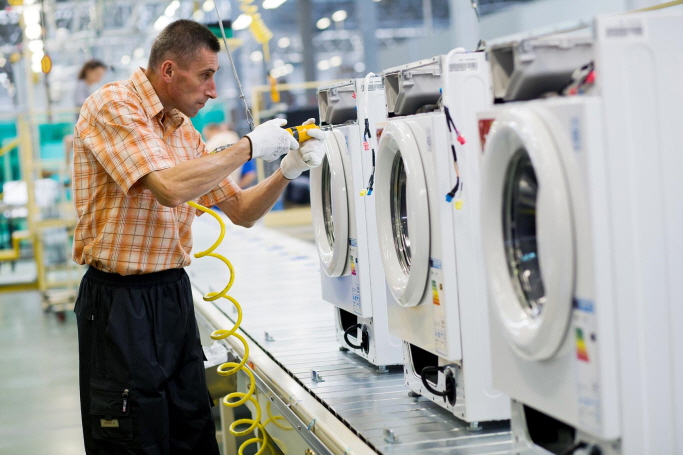 This photo taken by LG Electronics Inc. shows a factory worker at the company’s manufacturing plant in Poland.

South Korea’s electronics firms, led by Samsung Electronics Co. and LG Electronics Inc., said they are also keeping close tabs on developments in the new coronavirus crisis on other continents.

Samsung runs plants in Poland, Hungary and Slovakia, as well as in South Carolina and Texas in the United States.

They said all of their plants are operating as normal, but are increasingly fretting that the virus outbreak will damage sales at retail stores as people limit their outdoor activities.

“If stores are closed, people go online,” said an official from an electronics firm. “Budget-friendly products sell well online instead of premium products, so it could impact our profitability.”

Samsung said it has already closed its experience stores in the United States and Canada.

To prevent the spread of the new coronavirus, Samsung and LG said they have urged their overseas units in virus-hit countries to adopt remote working.