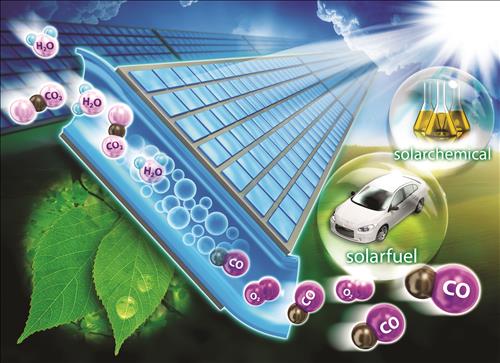 The results will be published in the March 21 issue of Journal of Materials Chemistry A.

SEOUL, March 18 (Korea Bizwire) — Korean researchers have developed an artificial photosynthesis technique that can convert carbon dioxide (CO2) to carbon monoxide (CO) at an efficiency rate of 4.23 percent, which is the highest level achieved to date.

A team led by Doctor Min Byung-Gwon and Doctor Hwang Yun-Jeong at the Korea Institute of Science and Technology (KIST) said on March 17 that the team has developed an integrated, photovoltaic system composed of cold sprayed cobalt oxide composite, which converts water into oxygen and hydrogen, and a gold or silver cathode chamber, which makes CO out of CO2.

The team’s device can also produce valuable chemical products such as formic acid when the cathode chamber is made from bismuth instead of gold or silver. Formic acid and carbon monoxide are currently trading for around 1.3 million won (US$ 1,150) per ton. The team said that they are committed to raising the efficiency level to 10 percent, and commercialization should be possible within 10 years

The results will be published in the March 21 issue of Journal of Materials Chemistry A.