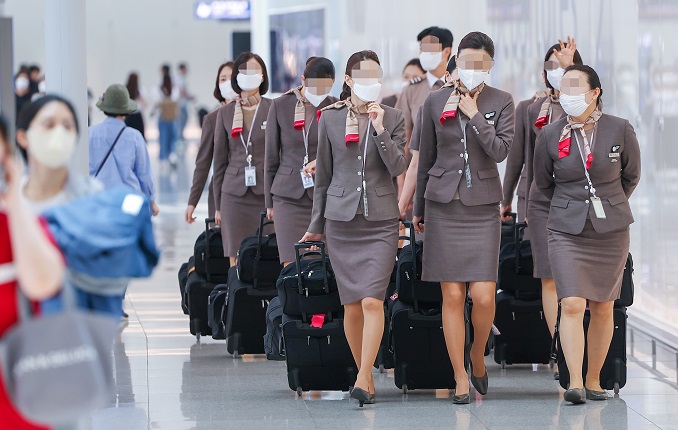 SEOUL, Aug. 18 (Korea Bizwire) — South Korean airlines have seen a shrinking number of employees since the COVID-19 pandemic, many of whom left their jobs after struggling with long-term leave.

Korean Air Lines Co., South Korea’s national flag carrier, had 17,555 employees on its payroll as of earlier this year, down by 430 people since late last year (17,992 people), industry sources said.

More employees have left their jobs considering that the airline hired 60 new pilots from the private and military sectors last May.

As of last month, less than 20 percent of all employees were on leave, with around 13,600 employees currently at work.

Asiana Airlines Inc. has also seen its workforce shrink, from 9,155 to 8,519 employees over the same period, down by 6.9 percent in the last two and a half years.

As of last month, around half of all employees are currently on paid or unpaid leave. The company plans to bring back employees in alignment with the return of overseas flights.

Korean Air reported 6.3 trillion won (US$4.76 billion) in sales in the first half of this year, 70 percent of which was derived from the shipping business. Passenger flights, combining both domestic and international flights, accounted for no more than 20 percent of sales.

Considering that international flights accounted for more than half of all sales in late 2019, the passenger flight business has yet to reach full recovery.