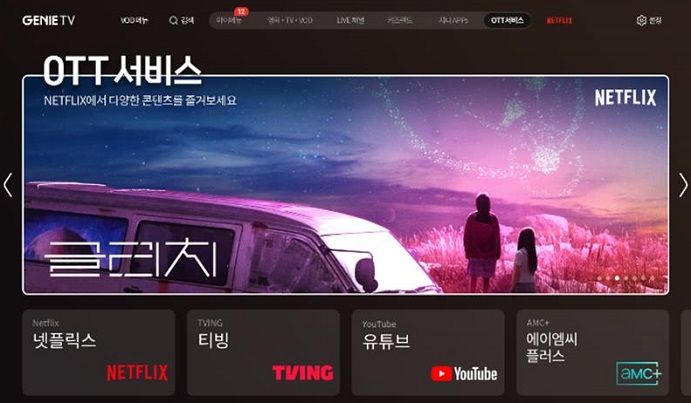 The new service, Genie TV, renamed from Olleh tv, will create a new media portal service that brings together all available content, including live media, video on demand, and streaming from local TV channels and internet streaming platforms.

In particular, its new over-the-top (OTT) section will let its subscribers, including those who do not have internet-connected smart TVs, enjoy films, series and shows from YouTube and Netflix directly on their TV sets.

The company said Tving, an online streaming platform run by South Korea’s entertainment giant CJ ENM, also will be available in the section early next year.

The new IPTV service also allow users to search favorite content by speaking on its device, while its artificial intelligence engine helps increase the speed and accuracy of the data searching.

The upgrade came as KT has been moving to diversify its business portfolio and strengthen the competitiveness through expanding business partnership with CJ ENM and AMC Networks, a U.S. entertainment media company.

Genie TV was estimated to have some 9 million subscribers as of end 2021.