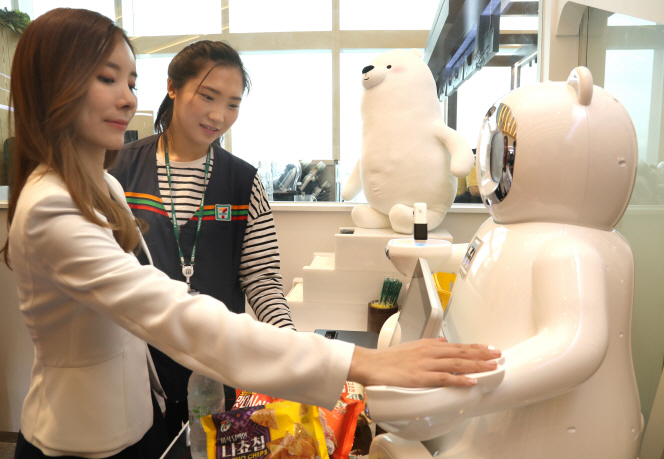 A model poses for a photo to show the function of Veny, a robot that allows customers to pay without cash or credit cards based on vein recognition technology, at a 7-Eleven store in Seoul on Aug. 28, 2018. (image: Yonhap)

SEOUL, Aug. 28 (Korea Bizwire) — Korea Seven Co., the operator of convenience store chain 7-Eleven in South Korea, on Tuesday unveiled a robot that allows customers to pay with their hands as local retailers accelerate their move to take the lead in next-generation retail models using the latest technologies.

The robot, dubbed Veny, was introduced at the store at South Korean retail giant Lotte’s 123-story skyscraper in eastern Seoul. It is where the company, an affiliate of Lotte, first launched a system that uses veins to verify the identity of visitors and let them pay without cash or credit cards — called “hand-pay” by Lotte — in May.

“Veny will become the symbol of 7-Eleven’s digital revolution,” Korea Seven CEO Jung Seung-in said during a press conference in Seoul. “We will continue our efforts to boost the competitiveness of our franchisees and give a new shopping experience to our customers.”

The robots will also be placed at another signature outlet in central Seoul, according the company.

The introduction of Veny is part of a broader move by South Korean retailers to adopt technologies for their online and offline platforms.

Earlier this month, E-Mart Everyday Inc., a major supermarket chain operator of Shinsegae Group, opened a cashier-less store in the capital where customers can pay through it mobile payment service SSG Pay without going through a checkout counter.