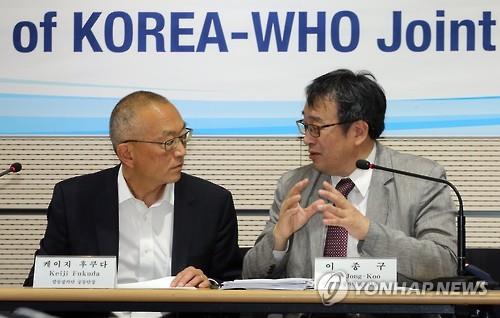 Keiji Fukuda, an assistant director-general of the World Health Organization (L) talks with Lee Jong-koo, head of Center for Global Medicine at Seoul National University, in a press conference at the heath ministry’s headquarters in Sejong City on June 13 of their joint probe into the outbreak of the Middle East Respiratory Syndrome. (image: Yonhap)

The warning came amid reports of a rebound in the daily tally of confirmed cases. A dozen new infections were found, raising the total number of MERS cases to 138, according to the country’s health authorities.

More alarming was the first report in the country of a fourth-phase infection despite the government’s all-out efforts to curb the spread of the MERS coronavirus.

The 12 new patients include an ambulance driver who last week transported two people diagnosed with the potentially deadly virus in the third-phase endemic.

After a weeklong on-site review, the WHO predicted additional infections.

“Because the outbreak has been large and is complex, more cases should be anticipated,” Keiji Fukuda, the WHO’s assistant director-general of health security, said at a press conference in the administrative town of Sejong, some 130 kilometers south of Seoul.

He was briefing reporters on the results of the agency’s joint study with a South Korean team led by Lee Jong-koo, head of the Center for Global Medicine, at Seoul National University.

Fukuda said more cases are expected although there is no indication of any mutation of the virus in South Korea, saying it has spread in a similar pattern to previous outbreaks in the Middle East.

Lee agreed that it’s still too early to declare a “complete end” to the fight against MERS.

“It is anticipated to take more time,” he said.

Meanwhile, a 67-year-old woman died while receiving treatment at a hospital, bringing the number of MERS deaths here to 14, according to the Ministry of Health and Welfare.

She had already suffered from thyroid gland and high blood pressure problems which were apparently worsened by the MERS virus, it added.