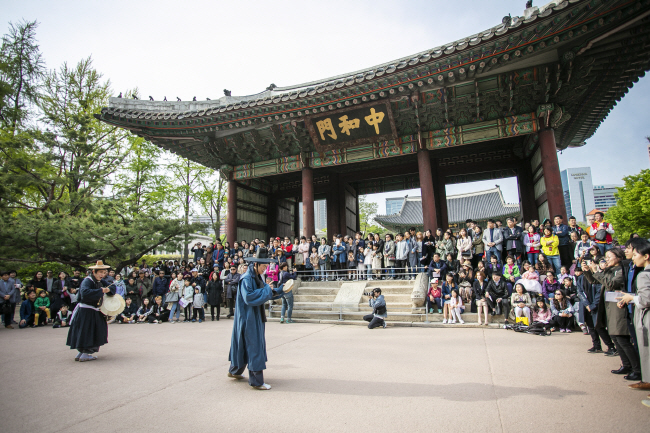 Deoksu Palace, one of the four major royal palaces from the 1392-1910 Joseon Dynasty, in Seoul. (image: Korea Cultural Heritage Foundation)

SEOUL, Jul. 8 (Korea Bizwire) — The number of people who visited the four main royal palaces and Jongmyo Shrine in Seoul surpassed the 5 million mark in the first half of the year for the first time in three years, the cultural authorities said Monday.

The four palaces from the Joseon Dynasty (1392-1910) are Gyeongbok, Changdeok, Changgyeong and Deoksu. Jongmyo Shrine is a place where the dynasty’s kings conducted ancestral memorial ceremonies.

Out of all the visitors, the number of South Koreans reached a record high of 3.99 million, compared with the 3.29 million recorded in 2016.

Among foreign visitors, Chinese visitors to the sites showed the highest growth rate of 125.8 percent from a year ago.

The number of Chinese tourists to Gyeongbok Palace, which has the main hall that was used by Joseon kings to hold official functions or receive foreign envoys, increased 194.5 percent from the previous year.

Meanwhile, the number of visitors to royal tombs from the dynasty was tallied at 1.20 million, roughly the same number as an average year.

The Cultural Heritage Administration attributed the rise to a measure to open Changgyeong Palace at night starting this year and the establishment of the Royal Palaces and Tombs Center, a body under the administration, to take care of royal palaces and tombs.