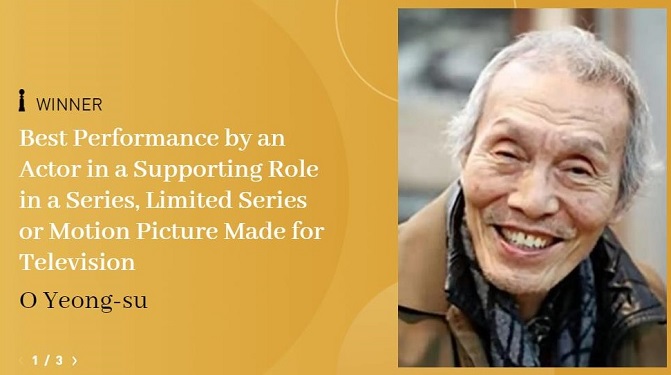 This image from the homepage of the Golden Globe Awards highlights O Yeong-su as the winner of Best Supporting Actor – Television on Jan. 9, 2022.

In the winners list of the annual awards event thrown by the Hollywood Foreign Press Association (HFPA) on Sunday (U.S. time), the 77-year-old actor won Best Performance by an Actor in a Supporting Role on TV for his role in the Netflix original series.

He beat Billy Crudup and Mark Duplass of “The Morning Show,” Kieran Culkin of “Succession” and Brett Goldstein of “Ted Lasso” to clinch the award.

O played the elderly participant Oh Il-nam, who is secretly behind the deadly contest, in which heavily debt-ridden people attempt to win 45.6 billion won (US$37.9 million) in prize money.

The 79th edition of the Golden Globes was held at the Beverly Hilton Hotel in Los Angeles with no audience and no television broadcast after a Hollywood boycott for its alleged lack of diversity.

O thanked the audiences across the world who loved the Korean-language show, which became the most successful original content made by the U.S. streaming giant Netflix ever, with a total of 1.65 billion hours of streaming in the first four weeks of release on Sept. 17.

“After hearing the news, I told myself that ‘you’re a good guy’ for the first time in my life,” he said through Netflix. “I hope everybody lives a beautiful life.”

It is the first time a South Korean actor has won a trophy at the Golden Globes, which has been regarded as an important bellwether for the upcoming Academy Awards.

This is a feat that no actor from the Oscar-winning black comedy “Parasite” (2019) and the American immigrant film “Minari” (2020) has achieved even though the two films took best foreign-language film awards each. 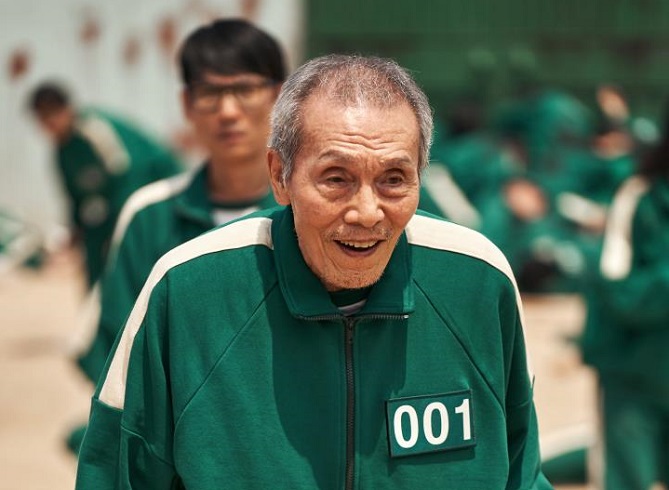 “Hacks” was named Best TV Series- Musical or Comedy, and “The Underground Railroad” took home the prize of Best Miniseries or TV Film.

On the film side, “The Power of the Dog” and “West Side Story” won Best Motion Picture in the drama and musical or comedy categories, respectively.

He has received recognition from a number of prestigious local awards, including the Dong-A Theatre Award in 1979, Baeksang Arts Award in 1994 and the National Theatre Association of Korea for Best Actor in 2000.

Although he has spent a majority of his career on stage, he has also participated in several films and TV series, such as “Spring, Summer, Fall, Winter… and Spring” (2003) and “Queen Seondeok” (2009).

In a recent TV interview, the veteran thespian said he has achieved many great things, including the newfound fame from “Squid Game,” throughout his career and now faces a time when he wants to leave those things behind and see how life goes.

He admitted he has rejected many offers to star in commercials in order to stay humble and keep the message of “Squid Game” unhurt.