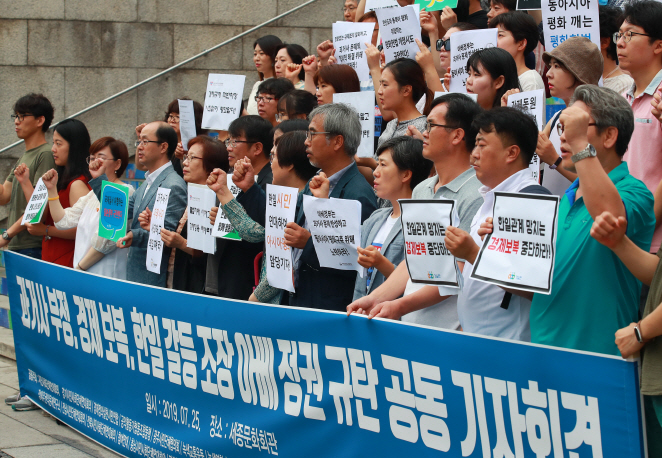 SEOUL, Jul. 25 (Korea Bizwire) — More than 6 in 10 South Koreans are taking part in a boycott of Japanese products amid growing public resentment over Tokyo’s export restrictions, a poll showed Thursday.

In the poll of 504 adults nationwide conducted Wednesday by pollster Realmeter, 62.8 percent said they were participating in the anti-Japanese boycott, marking steady rises from two previous surveys.

The boycott participation rate was 48 percent in Realmeter’s first such poll on July 10 and rose to 54.6 percent in a second survey on July 17.

The poll has a margin of error of plus or minus 4.4 percentage points with a confidence level of 95 percent.

Researchers at Realmeter said the surge of 14.8 percentage points in the participation rate in a period of two weeks means a rapid spread of the anti-Japanese boycott among South Korean consumers.

The sentiment in favor of a boycott was the majority in almost all age, gender and regional groups, except for supporters of the main opposition Liberty Korea Party (LKP) and conservatives.

The majority of LKP supporters were not taking part in the boycott for now, while the opinion was evenly divided among conservatives.

Realmeter said 68.8 percent of the respondents said they will participate in the anti-Japanese boycott in the future, while 26.4 percent ruled out their participation.

A boycott of Japanese products has been spreading among Korean consumers after Japan began applying export curbs on South Korea for three key materials needed for the production of chips and displays on July 4 in apparent response to Seoul’s handling of a wartime forced labor issue.

On Wednesday, members of the Parcel Delivery Workers’ Solidarity Union declared their refusal to deliver goods from Japanese clothing apparel company Uniqlo, while E-Mart, Lotte Mart and Homeplus employees belonging to the Korean Mart Labor Union said they will refuse to give customers guidance on Japanese products.