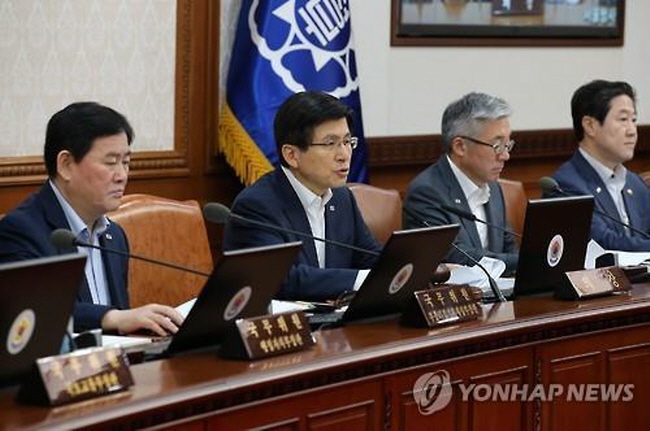 South Korean Prime Minister Hwang Kyo-ahn (second from L) speaks at a Cabinet meeting in Seoul on July 28, 2015, where he declared a de facto end to the MERS outbreak in the country. (Yonhap)

SEOUL/SEJONG, Jul. 28 (Korea Bizwire) — Prime Minster Hwang Kyo-ahn Tuesday declared a de facto end to the outbreak of MERS, which has claimed 36 lives in the country since May.

The number of people diagnosed with Middle East Respiratory Syndrome has remained flat at 186 for the past 23 days, with the release of the last suspected patient Monday, indicating a slim chance of the country reporting an additional case.

“After weighing various circumstances, the medical personnel and the government judge that the people can now be free from worry,” Hwang said in a meeting of relevant government officials.

An official end to the outbreak at a scientific and medical level is expected to be made late in August as World Health Organization rules require a 28-day waiting period following the recovery of the last patient, officials said.

“I am sorry to the people for causing worries and discomfort,” Hwang said, asking the people to return to their normal daily lives.

The prime minister also offered an apology for the country’s poor early response to the outbreak of the disease.

The government came under criticism that it had failed to bring the disease under control at an early date since the first outbreak was reported on May 26.

Hwang also vowed to swiftly execute a supplementary budget bill that was passed through the National Assembly on Friday.

After a three-week tug-of-war between the ruling and opposition parties, the parliament gave the nod to the 11.6 trillion-won (US$9.9 billion) extra budget to cope with fallout from MERS, which has had a negative impact on Asia’s fourth-largest economy.’

With the declaration, the government said it will scale down its temporary disease control center that was set up to deal with the MERS outbreak.

However, it will continue to maintain a high level of watch against any new cases, the health ministry said.

Monitoring efforts will include scanning all passengers for fever at the country’s major airports and ports.

Vietnam lifted its travel warning on South Korea the same day, becoming the last country to do so, according to the Foreign Ministry.

A total of seven countries, including parts of China, the Czech Republic, Russia and the United Arab Emirates, had advised its citizens against traveling to South Korea.

The outbreak was also expected to change the way the country deals with infectious diseases in the future.

Already, the government has given all medical institutions access to the so-called drug utilization review system, which the health insurance review agency used to determine any abuse or misuse of medicine. It can also provide information about a patient’s previous conditions and possible exposure to any infectious diseases.

The move comes as the country’s first MERS patient, a 68-year-old male, has been partly blamed for the spread of the disease here. The man had failed to mention his trip to the Middle East, where he supposedly caught the MERS coronavirus, as well as his previous visits to other hospitals, apparently exposing tens of others to the disease.

The Health Ministry said additional and more detailed steps to deal with infectious diseases in the future will likely be announced next month.