SEOUL, Sept. 10 (Korea Bizwire) — On grounds that once hosted the U.S. Army base in central Seoul, a new push for the construction of low-rental public housing has been on the rise in place of the current plan to establish an ecological park.

As the cost of homes continues to increase, people have been voicing their opinions, calling the Yongsan U.S. military base a suitable place to expand the supply of housing.

On portal websites and blogs catering to real estate enthusiasts, many Internet users have expressed their sentiment, asking for public housing to be built on the land that formerly housed the American military.

On the Blue House’s website, more than 200 petitions have been posted regarding this issue.

Another post claimed that building an eco park in Yongsan would only lead to the inflation of real estate prices in nearby neighborhoods.

The area of the former U.S. military base totals approximately 3.48 million square meters, on par with the size of Eunpyeong New Town, another neighborhood in Seoul that had been redeveloped in the last decade.

The government, however, currently does not have plans to develop the district for housing.

According to a previous announcement, the area will be turned into a public park, the likes of Central Park in New York City, a presidential campaign promise made by President Moon Jae-in during his election campaign. 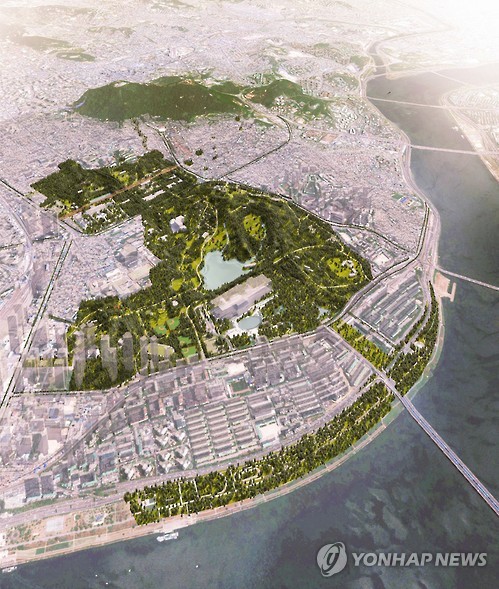 The area of the former U.S. military base totals approximately 3.48 million square meters, on par with the size of Eunpyeong New Town, another neighborhood in Seoul that had been redeveloped in the last decade. (Image courtesy of Yonhap)

But due to the continued increase in housing prices, the Ministry of Land, Infrastructure and Transport may not be able to ignore the public’s cry for action.

Meanwhile, the U.S. military forces that had once occupied the area in Yongsan relocated to Pyeongtaek in June.