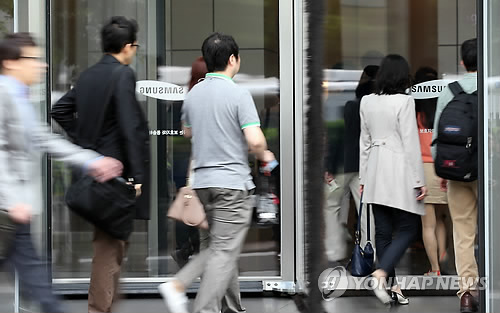 Employees of Samsung Electronics will choose when to come and leave their offices and are only obligated to work at least four hours a day, 40 hours a week. (image: Yonhap)

Under the plan, employees are given the choice of when to come and leave their offices and are only obligated to work at least four hours a day, 40 hours a week.

“The new policy is expected to foster employees’ creativity,” a Samsung official said.

The move came a month after Samsung suggested the program as a reward upon deciding to freeze wages for all workers in 2015.

“While the flexible hours cannot be used every day due to the hierarchical atmosphere, the new system is clearly a lifesaver for mothers with young children,” a Samsung Electronics employee said.

The program is already implemented at a handful of divisions.

Samsung Group plans to implement the new system at Samsung Electronics and gradually expand to overseas offices, as well as other affiliates, such as Samsung Electro-Mechanics Co., Samsung SDI Co. and Samsung Display Co.

Industry watchers said the new rule adopted by South Korea’s No. 1 business group may spread to other rivals as well, bringing significant changes to the country’s labor sector.