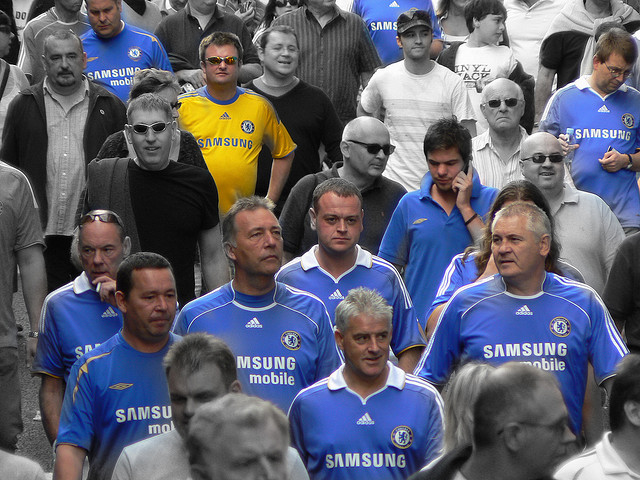 Samsung Electronics is likely to terminate the contract with Chelsea FC at the end of this year. Chelsea is the only overseas athletic club that Samsung sponsors other than Olympics and Asian Games. (image: Ol.v!er [H2vPk])

SEOUL, Oct. 6 (Korea Bizwire) — Samsung Electronics is tightening its belt in response to the disappointing financial results of late. One of the most visible decisions is the non-renewal of the uniform sponsorship it has maintained with London’s Chelsea Football Club for eight years. This follows an announcement that it would cut back on spending limits on overseas business trips including airfare, hotel, and daily allowance for its employees.

According to industry sources on October 5, Samsung Electronics is likely to terminate the contract with Chelsea FC at the end of this year. Chelsea is the only overseas athletic club that Samsung sponsors other than Olympics and Asian Games. Even though it provides sponsorships to the Asia-Pacific Golf Confederation and Africa Cup of Nations games, the sponsorship money falls far short of that for Chelsea.

The exact sponsorship volume provided to Chelsea has not been disclosed by Samsung. Given LG Electronics pays about US$30 million for the sponsorship of Bayer Leverkusen, a German Bundesliga club, from August last year, however, it is estimated the amount Samsung pays is almost comparable.

The recent move by the Korean electronics giant was somehow expected within the industry. In the first half, it cut back on advertising and promotion budgets while enforcing an unusual rule that all its employees including executives take economy class flights.

SEE ALSO: Samsung Electronics Concentrates on Tablets Rather Than Laptops

As for ad spending, it is estimated the company expended 327 billion won for the first six months of the year, only a sixth of what it spent a year ago. In this belt-tightening mode, it was widely expected the overseas sports marketing contract costing several tens of billion won would be discontinued.

Some analysts suggested that the latest decision was at least partially due to the worry ahead of the October 7 earnings guidance.

An industry official commented, “Following the financial result announcement in the third or fourth quarter, there may be big reshuffling within the organization. As part of an effort to cut cost, there will be a variety of measures to tighten belt at home and overseas.”

Samsung has been the main sponsor of EPL(English Premier League)’s top club team, Chelsea FC, since 2005. Chelsea FC was founded in 1905 and has been a mid-level team throughout. In the 2000s, Chelsea FC became one of the top power house by bringing in world top class players. Due to Chelsea FC’s improvement in record and increase in popularity of EPL, Chelsea FC is getting enormous attention from the media and their matches are currently being aired in 220 countries.