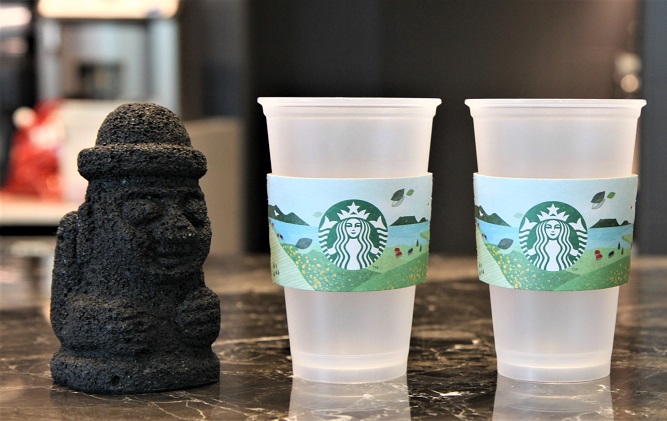 This promotional image was provided by Starbucks Coffee Korea on Oct. 22, 2021.

SEOUL, Oct. 22 (Korea Bizwire) — Starbucks Coffee Korea said Friday it will stop using disposable cups at all of its stores on South Korea’s southern resort island of Jeju within this year in the latest move to protect the environment.

Starbucks said it eliminated all single-use cups at four of its stores on Jeju in July during a trial run before applying the policy to all of its 23 operations on the island.

The four stores only use multiuse cups, both for drinking inside the shops and for take-out. Customers are asked to pay an extra 1,000 won (US$0.85) as a deposit that is repaid when they return the used cups at any of the four stores or a receptacle at Jeju airport.

Starbucks estimated that its trial run at the four stores saved some 200,000 disposable cups in the past three months.

It expected that about 5 million disposable cups would be saved per year when it expands the policy of no single-use cups to all of its 23 stores on Jeju.

In April, Starbucks said it aims to eliminate all disposable cups at all of its stores in South Korea by 2025.

In 2018, Starbucks removed plastic straws from stores in South Korea and replaced them with paper ones.

There are some 1,200 Starbucks outlets in South Korea.