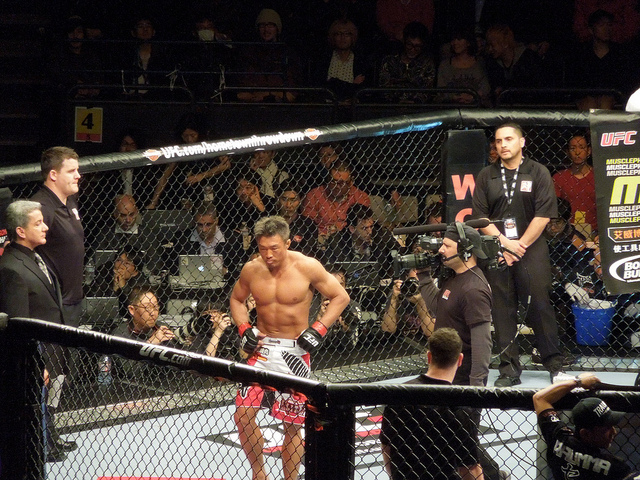 Choo is loved in Korea not only as a UFC fighter but also as the father of kid idol Choo Sarang and the husband of Japanese top model Shiho Yano. (image: Koichi Taniguchi/flickr)

Body Friend, a healthcare company in Korea, estimated that thanks to the match the company obtained an advertising effect equivalent to more than 5 billion won (US$4.8 million). Body Friend selected Choo as its endorsement model earlier this year to support his returning to the octagon after two years of layoff due to injury.

The match was broadcast live by cable channels including Super Action, IPTV and SPOTV, Internet streaming site Africa TV and the UFC official site. During the match, Choo wore a uniform with a Body Friend logo and played a role as literally a “walking or fighting billboard.”

Choo has huge fans in Korea not only as a UFC fighter but also as the father of kid idol Choo Sarang and the husband of Japanese top model Shiho Yano . As Korean audience’ interest in him turned up, so did the viewer ratings and advertising effect. Including the live casting and reruns on the cable channels, its rating recorded more than 5 percent. In terms of viewing population, it is equivalent to 2.5 million viewers who watched the game.

In online, Africa TV has shown more than 3.2 million hits for the game video so far and in total more than 5.7 million watched the match in Korea. Body Friend estimated that his advertising impact will be three to four folds more considering his match was broadcast overseas including Japan and the U.S. Still, more are coming to watch the video and photos of the match in various Internet portals.

An official at Body Friend said, “We are now preparing to advance into the Asian market with our flagship massage chair. We are glad to introduce our products to the global market through Choo’s returning match.”