SEOUL, Feb. 2 (Korea Bizwire) — Domestic tech companies and automobile manufacturers are either releasing new systems or widening access to previously exclusive technology, with the race to establish control over the nascent “connected car” market heating up.

Also referred to as futuristic vehicle information service or infotainment service, these systems entail the application of rapidly improving AI capabilities into the driving ecosystem, particularly for carrying out destination searches in navigation software, music volume moderation and safety inspections via vocal commands.

According to auto industry insiders, Hyundai and Kia starting February 1 will include Kakao’s AI platform — the Kakao I — previously available only on their high-end vehicles on lower-priced models like the Hyundai Sonata, Hyundai Avante and Kia Sportage lines.

Early next month, Naver is slated to release the “Aftermarket” version of its own service called “Away”. Built by in-house R&D division Naver Labs, Away was initially restricted to vehicles operated by car-sharing service SoCar.

Telecom providers are also jumping into the fray, with the nation’s leading operator SK Telecom releasing T Map x NUGU in September. A marriage of SK Telecom’s AI technology NUGU and its GPS and navigation service T Map, the hybrid software was downloaded by more than 3 million users in the 18 days after launch.

Despite Google’s Android Auto app’s lofty reputation, due to South Korean laws on national security severely curtailing the reach of Google Maps, the service was never able to establish a foothold locally.

As a result, up until recently the average consumer’s exposure to these next generation technologies remained limited to Apple’s Carplay feature and built-in capabilities offered in foreign luxury vehicles like BMW. 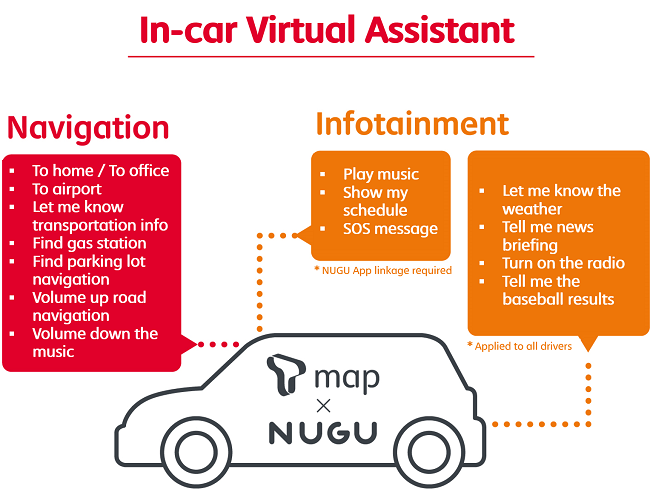 A marriage of SK Telecom’s AI technology NUGU and its GPS and navigation service T Map, the hybrid software was downloaded by more than 3 million users in the 18 days after launch. (Image: SK Telecom)

A tech industry insider said firms do not take lightly the commonly held belief that the car is one of the most optimal environments for the use of artificial intelligence, and predicted that the growing preference for “smart cars” by consumers will spur on R&D efforts in this area.